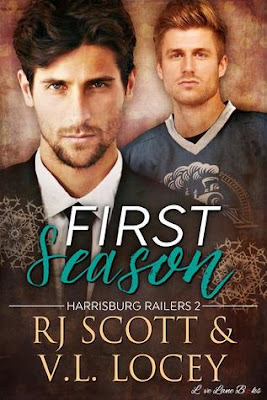 Layton Foxx works hard for what he has. The condo, the career, the chance to make his mark, is all down to the sacrifices he has made. With tragedy in his past, he doesn’t want or need love. Then he meets Adler Lockhart, the extroverted, sexy winger for the Harrisburg Railers and abruptly he can’t avoid love even if he wanted to.

Adler Lockhart has had everything handed to him his whole life. Cars, villas, cash, college tuition at the finest Ivy League schools. The only things he doesn’t have are parents who care or the love of a good man. Then Layton walks into his privileged life and shows him what real love can be like.

I will admit I picked up this story because I am on a MM kick and it takes place in PA where I grew up. I don't find a lot of books set there so whenever I do find one it instantly goes on my to-read list. Now I didn't expect to enjoy this story as much as I did. It was a really great read and I am excited to read more from the series.

Layton is new to the Harrisburg Railers. He is a PR person hired to help deal with the NHL's first out gay player (the character from the first book in the series, which I haven't read and this story worked as a standalone). He is a bit skittish, he had some really bad things happen to him when he was younger that makes him panic in certain situations. He is good at his job and wants to get his job done and maybe find some nice, small, not super muscular guy. That is who he needs.

Alder is new to the Harrisburg Railers also, but he is part of the team. And he has a big mouth and says the first thing he thinks of without a filter. I really loved him. His sections were so much fun as he didn't have a normal upbringing and doesn't really know how to show affection. Or he shows it in ways that others might not realize that is what it is. Because that is how his parents were. When he meets Layton for the first time he is drawn to him, but doesn't make the best first impression. Especially because of why Layton is there and how Alder just runs his mouth trying to be funny.

These two were super sweet together. With Layton's issues it would have been easy for Alder to go too far or do something to upset him, but Alder from the first notices everything. He notices when something is stressing Layton out and subtly fixes it so he can be calm again. Really how Alder was with him was adorable. I loved them together so much. They definitely bring out the best in each other and help whenever needed. It was a great read and I am looking forward to reading more!