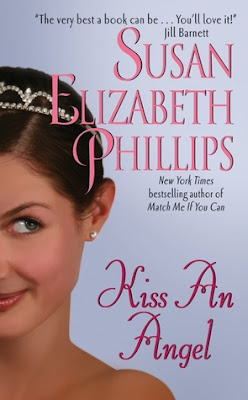 Pretty, flighty Daisy Devreaux can either go to jail or marry the mystery man her father has chosen for her. Arranged marriages don't happen in the modern world, so how did the irrepressible Daisy find herself in this fix?

Alex Markov, as humorless as he is deadly handsome, has no intention of playing the loving bridegroom to a spoiled little feather-head with champagne tastes. He drags Daisy from her uptown life to a broken down traveling circus and sets out to tame her to his ways.

But this man without a soul has met his match in a woman who's nothing but heart. Before long, passion will send them flying sky high without a safety net... risking it all in search of a love that will last forever.

Daisy grew up with a mom who valued looks more than anything and flitted from one man to another. After her mom left she was raised by her dad who can be a bit cold and distant. He thinks Daisy is not very intelligent and flighty and won't ever do anything with her life. When she gets in a bit of trouble he gives her an ultimatum - marry a guy of his choosing or go to jail. So she picks the guy. How hard could that be? Only she feels wedding vows are sacred and even though they don't seem to get along and she ends up in a situation she was not at all expecting she is determined to try and make it work. They are only supposed to be together for 6 months then go their separate ways, but Daisy's conscience won't let her not try and work things out with her husband. Even if it was an arrangement.

Alex knows he cannot feel love. He never has and he never will. His childhood ruined him and he doesn't want to hurt anyone when he can't return their feelings. He didn't really want to marry spoiled Daisy, but he owes her father and he makes good on his debts. So marry her he does. But he is not going to be happy about it. Only...Daisy is not at all like what her father told him. He was expecting someone who couldn't hack it in the circus, where he is currently living in a tiny, not very nice trailer. Only Daisy keeps surprising him. He tries to stay away, tries to stay unattached, but she is so nice and sweet and positive it is hard.

These two don't start off liking each other, they think the other is something they are not, but they are in close quarters and start to genuinely care for each other. Daisy doesn't have it easy either. Some things happen and the circus folk don't look too kindly on what they think she did. I loved Daisy. She was so kind and wonderful. Where someone could have been mean or spiteful she turned it into something positive. She helped those who needed it and really grew as a person. And her hard work paid off. This was a sweet story and I really enjoyed watching these two come together.