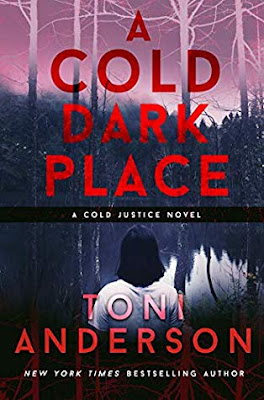 An assassin risks everything when he falls in love with an FBI agent hunting her sister's killer.

Former CIA assassin Alex Parker works for a clandestine government organization hell-bent on taking out serial killers and pedophiles before they enter the justice system. Alex doesn't enjoy killing, but he's damn good at it.

When Mallory starts asking questions, Alex is ordered to watch her. As soon as they meet, the two begin to fall in love. But the lies and betrayals that define Alex's life threaten to destroy them both--especially when the man who stole her sister all those years ago makes Mallory his next target.

For the most part I really enjoyed A Cold Dark Place. It was fun trying to figure out who the killer is, who kidnapped Mallory's twin sister all those years ago. Plus you have a nice romance with Mallory and Alex, but you know Alex's current path in life is going to cause problems in the end. It was fun to watch it all unfold.

Mallory is an FBI agent who is trying to find who kidnapped and killed her sister. They never found a body or anything, but she knows her sister is no longer alive as the twin connection was severed. One day she woke up and her sister wasn't there anymore, she couldn't feel her, so she knows they will never get her back. But she has to find out who took her and what happened to her.

Alex is former CIA working for this super-secret government agency to take out killers and pedophiles before the cops get to them. Because the criminal justice system doesn't always work and these people shouldn't be alive to harm others anymore. He hates killing, but he is good at it and these people deserve it. He is counting down the days until he can stop working for them as he wants out. He just has to make it through his service that he committed to.

Now when Mallory and Alex first meet they are both drawn to the other, but neither want a relationship or anything. They don't have time for it. When Alex has to keep an eye on Mallory and make sure she doesn't uncover anything she shouldn't things don't work out the way he had planned. Even though he knows he should keep his distance he can't stay away from her. He will do anything to keep her safe and help her sleep easier at night.

Now, for the most part, I really enjoyed this story. Alex and Mallory were great together, but I couldn't see how what Alex does would mesh with Mallory. And there is a bit of an upset when everything comes out, but it works out way easier than I would have imagined. I know he is working for the secret government agency, but still there were more pieces involved and to have it all work out happily ever after the way it did was just okay. It didn't feel like it would really have been that easy, but oh well. I am curious to read more by this author.