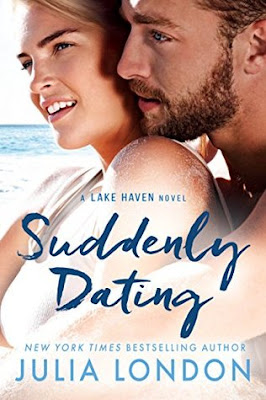 If only Lola Dunne had the time—and the courage—she’d write her novel, and maybe even start dating again. When her friend offers the use of her summer home overlooking Lake Haven, Lola sees the chance to focus on herself for a change, and she eagerly accepts.

Engineer Harry Westbrook is waiting for his ship to come in. But it’s not happening soon enough for his girlfriend, who’s left him for good…again. To nurse Harry’s heartache, his pal extends an invite to his lake house in East Beach.

When it turns out that Harry’s and Lola’s friends are a divorcing, not-on-speaking-terms couple sparring over the same house, the strangers find themselves accidental (and reluctant) roommates for the summer. They agree to make the best of it, even posing as a couple to mingle among East Beach’s well-heeled crowd. But the ruse is starting to feel real—and romantic. Are they brave enough to reveal their feelings before the summer nights turn cold?

Suddenly Dating was a fun, quick, easy read. Lola and Harry were cute together and I enjoyed watching their story unfold.

Lola has always wanted to be a writer, but has never taken steps to do so. She gave up a lot to help her siblings go to school and do whatever they wanted to do, but they are all grown now and yet she still does whatever she can for them. She is still putting herself last and is a pushover. She was married to a guy who took advantage of her kind nature and yeah. She is now divorced, not happy in her job, not really where she wanted to be. When she becomes friends with another lady who is divorcing, her new friend talks her into quitting her job and using her summer house to write the book she always wanted. It should be peaceful and quiet and everything she needs to get her novel written.

Harry is an engineer who just got out of a relationship as well. He thought he would marry his ex, they broke up all the time and got back together, but she finally had enough and called it quits for good. He is trying to get his new business profitable and it is a lot of work. Work that cost him his girlfriend and she (and his family for that matter) doesn't understand why he didn't just keep working at the firm he was working at. He was making good money, but he wasn't happy there. He wanted his own company and he is determined to figure out a way to make it work.

When Harry's divorcing friend offers to let him stay at his summer home he jumps on the chance. He had to sell his place to keep financing his business and he wasn't looking forward to moving back in with his family. Everything should be great. Only of course Lola and Harry are both staying at the same place and let's just say they definitely do not get off to a good start. While Harry thinks she is the most beautiful women he has ever seen, they definitely don't like each other. Lola is messy and Harry is a neat freak. Both of them are stubborn and refuse to leave so they try and figure out a way to make it work. But it isn't easy. When Lola befriends a local and finds out her favorite author is nearby for the summer she is super excited to meet her. And her new friend can introduce her. And can also help Harry with his engineering business. So in order to help themselves they pretend to be dating. That will get Harry the in he needs and Lola can meet her idol. Only of course things get a bit mixed up when they start spending so much time together. They start falling for each other and it was really cute to watch.

Now my one issue with the story is Lola and how she never really learns to stand up for herself. She has her moments, but she doesn't really seem to have changed as much as I had hoped. She was sweet, but spineless and well...I wanted more for her. I want her to be amazing, but it was a fun read regardless.