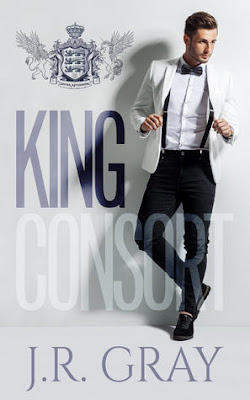 Avoiding sleeping with women was my specialty, an art form even. As the future King of England I couldn’t be caught sleeping with men. My whole life played out in front of the paparazzi, and they didn’t miss a thing.

I had a carefully crafted womanizing persona to maintain. My life came with rules, all of which I broke when I couldn’t resist a one night stand with the enemy: A beautiful paparazzo with a heart of gold. He may be the only person who doesn’t want me for my title, and he can never be anything more than my secret.

But secrets have a way of coming out and not only will they scare him away, but they’ll lose me the crown.

I loved King Consort! It was such a fun MM royal romance. Xavier and Prince Louis were so much fun to watch fall for each other.

Prince Louis needs to get married soon, but he has a problem - He doesn't like women like that. And no one can know because he will be King one day. So he is a well-known ladies man, only he doesn't get the ladies. He secretly gets the men. And they have to be secret one time things. He can't have a relationship because what would happen if it ever got out?

I loved the way Louis and Xavier met. Xavier is a bit of an introvert because of some things in his past, he doesn't put himself out there that much, but there is just something there between them. They are hot for each other and Xavier doesn't think he will see Louis again, but then it gets interesting. Because Xavier is paparazzi and Louis is royalty. Oh these two were fun. Because Louis might not trust Xavier at first because the paparazzi usually will do whatever for a story. But they like each other and it was so sweet. I loved watching them try to figure it out even if they thought there is no way this can last forever.

The secondary characters were also a blast. I loved Louis' sister and grandmother and everyone really. This was a very entertaining read. It was the first from this author for me, but won't be my last.