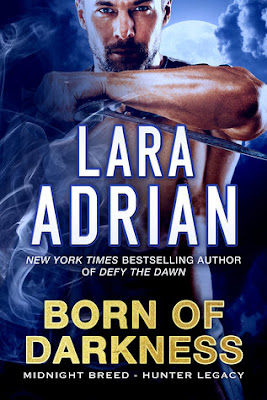 As a former assassin in the Hunter program, Asher is one of a small group of Gen One Breed vampires who survived the horrors of a madman’s laboratory and the cruelty of the training that made him one of the most lethal beings in existence. Now, twenty years after his escape from those hellish origins, Asher is a loner whose heart is as cold as his skills are merciless. But when he thwarts a killing under way in the middle of the desert outside Las Vegas, Asher meets a beautiful woman who draws him into a deadly game against powerful enemies—one that will test both his skills and his tarnished honor.

Naomi Fallon is used to getting out of dicey situations. Orphaned as a child after her mother’s murder, she didn’t survive twenty-six years on the street without using up most of her nine lives. But when her latest caper lands her in the Mojave against a Vegas gangster’s henchman, she’s certain her number is up.

Then he appears—immense, brutal, and far from human. Naomi’s never needed anyone’s help, least of all one of the Breed. But after one risk too many, only a man with Asher’s skills can keep her safe. Yet the solitary, seductively handsome vampire has enemies of his own, and a secret that will not only shatter her faith in him but her heart, proving what she’s feared all along—that trust is only an illusion and love may be the sharpest weapon of all.

I was in the exact right mood to read Born of Darkness when I picked it up. I often think about how if you read a book at the wrong time, one you are not in the mood for, it can ruin the book. But if you get it at the right time you might have enjoyed it greatly. That was Born of Darkness for me. I think if I would have been in a different mood, had not wanted exactly what this story was, I wouldn't have enjoyed it as much.

Asher is a former vampire assassin. He lives in the middle of nowhere and keeps to himself. He has done a lot of not good things and he doesn't want to be around people. He wants to just live by himself out on his farm and let things be. Only he is also a great guy and helps out when needed. So when he sees people doing something and knows they are up to no good out by his house he has to step in. He knows he shouldn't, but he can't just let this lady get killed because he did nothing.

Naomi is...well she thinks she is super smart, can get out of any scrape, but she can't. She has some extra abilities, but she tries to keep that under wraps. And she is on a path of revenge against the bad guy who hurt someone she cares about. Only he seems to be onto her and now she is in the middle of the desert about to be murdered...

Naomi is not very happy to have Asher step in and save her. Well, she is happy to be alive, but not happy to be with a vampire. After all he will want something from her right? Probably her blood. And she doesn't want to give it to him. Only...he never asks for it or takes it. He is perfectly happy to get her squared away and out of his life, no thanks needed. Of course it doesn't work out that way, things happen to throw them together more and they start falling for each other. Even though neither wants that, they can't help it.

I really liked these two. They were a lot of fun to read. Sure, Naomi is not always the smartest and could have been annoying to read, but I liked her. And Asher is so hard on himself, but he was also sweet and kind and caring. He definitely has that self sacrificing, better to stay away even if he wants her thing going on. But they eventually figure everything out. And the bad guys are pretty bad and yeah. As I said I was in the right mood for this kind of story. I don't read a lot of paranormal romances, but I did really enjoy this one. I will definitely pick up the next in the series to read next time the mood hits me.