Exclusive / A Touch of Heaven by Samantha Chase 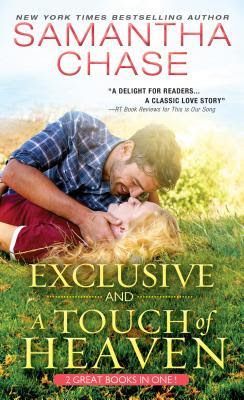 When little-known writer Taylor Scott is granted two weeks to interview a famous reclusive author, it's the opportunity of a lifetime. So is the chance to rekindle her friendship with Mike Greene, who happens to be the author's assistant. But as feelings deepen and time winds down, Taylor will have to choose between the story that could launch her career and an unexpected chance at love.

A Touch of Heaven

As Regan Amerson makes the emotional decision to sell their family home, her mother wins a home makeover from a reality TV show. Regan is furious, and jaded host Sawyer Bennett isn't thrilled either. That is, until he meets Regan--and finds himself enamored by the fiercely independent beauty. She may want nothing to do with him, but Sawyer isn't one to give up easily...
Review:

Exclusive & Touch of Heaven were both sweet, quick reads.

Exclusive is the story Taylor and how she is granted the opportunity to interview a famous writer that no one really knows anything about. No one even knows what he looks like so it is quite the scoop. She is not really sure why she was chosen as she works for one of the little guys, but she can't pass up this opportunity. Only she has to go out to the author's house near a small town for two weeks, the first she will just be talking with his assistant and then the second week the author will be back to do the interview.

Now when Taylor shows up at the author's house the assistant is her old friend Mike whom she hasn't seen in forever. He was best friends with her ex who was not a very good guy, but she always liked Mike. Not like that at the time, but now that she is getting to know him again she is crushing on him...only she has a job to do so can she really do anything about it even if he was on board?

Now it was fairly obvious what was going to happen with this story very early on, but it was fun. I liked Mike a lot, though I wish we would have known a bit more about his past and why he is happy hiding out in a small town. He doesn't really want fame and fortune and is happy with where he is which is all good, but it was alluded to that there would be a story there. Like something happened to make him kind of a recluse. Not really as he does get out, but I wanted a bit more. I really liked him though and enjoyed seeing these two reconnect. I didn't always understand Taylor and her rules that seemed to be a bit odd at times, but that could just be me. She was sweet and it was a fun story.

Touch of Heaven is the story of a mother and daughter who are super close and the mom has to sell her home as it is too much for her in her older age. The daughter, Regan, is having a really hard time letting it go as that is where she grew up. When her mom gets signed up for a reality TV show where they makeover your home Regan is not at all happy. Only the guy who is designing the makeover she has an instant attraction to even though she doesn't want to.

Sawyer was a sweetheart. I loved him and his ideas on how to change things. His show is all about not destroying but enhancing what is already there. He has never really felt the need to settle down or anything, but lately, he is getting a bit disillusioned with the show and once he meets Regan he knows she is worth fighting for. Once Regan lets him in these two were so sweet. I really enjoyed watching them fall for each other even if Regan could be frustrating at times (especially towards the end!).

Overall this was a nice collection of quick, sweet stories.