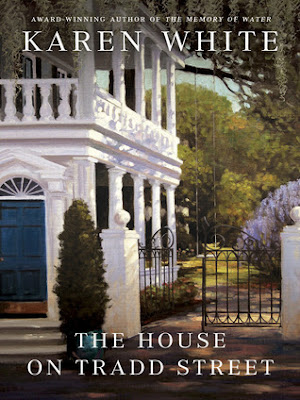 Practical Melanie Middleton hates to admit she can see ghosts. But she's going to have to accept it. An old man she recently met has died, leaving her his historic Tradd Street home, complete with housekeeper, dog—and a family of ghosts anxious to tell her their secrets.

Enter Jack Trenholm, a gorgeous writer obsessed with unsolved mysteries. He has reason to believe that diamonds from the Confederate Treasury are hidden in the house. So he turns the charm on with Melanie, only to discover he's the smitten one...

It turns out Jack's search has caught the attention of a malevolent ghost. Now, Jack and Melanie must unravel a mystery of passion, heartbreak—and even murder.

The House on Tradd Street was a book club read for me and honestly if not for that I wouldn't have made it past the first chapter. This book was kind of a mess for me and I absolutely hated the main character. *Some spoilers ahead and it may get a bit ranty as well...I really didn't enjoy this read*

So our main character Melanie can see ghosts. She hates that she can and she doesn't want anyone to know she can and she is suddenly left an old house by a guy she met days ago for the first time. She is a realtor specializing in old houses even though she hates everything old (I have NO idea why the synopsis says a real estate agent who loves old houses as that is a straight up lie. Melanie HATES old houses and couldn't care less about any secret histories). Because she has a bad past so she hates anything old. Why think of anything that has happened prior to now ever? I mean old things are totes the worst and who would ever want something old? I mean it is old and I hate everything old says our beloved Melanie. Well, not beloved, but man she was annoying with her hatred of anything old. She is totes over her past, totes over everything that happened, which is why no one can ever mention her mother to her. Even well meaning people who think she should know what really happened back then. Nope, she is fine, better to plug her ears and sing "la la la" than to listen to someone say anything about her mother. Because she is totes over it so there is no need. Ugh.

That and Melanie is so incredibly stuck up. She is the worst. For reals. Jack wants to talk to her about her newly aquired house and so he takes her out for dinner so they can discuss things. Only he takes her *schock, horror* to a dive! Can you believe it? No linen table cloths, no fancy waiters, oh it was horrible. I don't know how Melanie survived. Thank goodness when she looked around the room when she first got there she didn't see anyone she knew. Can you imagine if anyone had seen her in a dive?!? Oh, the world would have ended. She was horrible. I hated her so so much. It was like the place Jack took her to sounded fine, just not up to Melanie standards. And the book doesn't get much better from here. Jack starts helping her fix up her house and she is horrible to him all the time. Like he is helping, sure he has a hidden agenda, but he is helping. And she was horrible.

Oh, I know she said she doesn't want people to know she sees ghosts because she used to get picked on for it or something, but she was bonkers. Things start happening in her new house (she has to live in it for a year), bad things, things that could potentially kill her, and no matter what she will venimently deny that she can see ghosts. Even though it is the ghosts that are trying to get her. Especially to Jack. Because...well I am not sure why. He is totally okay if she sees ghosts, thinks it is a bit cool actually, but she cannot let him know even when he is there and the ghosts start messing with her. It is like she would literally rather die than say she can see ghosts. Because the ghosties that she can see but claims she can't do almost kill her. It was ridiculous and I did not understand at all.

So Jack was our love interest and for this story he was my favorite character, but that is not saying much since I hated every other character. He was nothing special, he has an ex who ran away when they were supposed to be married and he is still a bit hung up on it. He doesn't know what happened to her and that whole storyline was also kind of lame. Like his ex's ghost keeps trying to get Melanie to tell him she always loved him, but Melanie, not being able to see ghosts, refuses for the longest time. It was dumb. And when she finally does? Well then Jack is fine and dandy and can move on and live happily ever after with Melanie. Yey! Oh, wait...that doesn't make a lot of sense. It was too rushed and not that good. Oh well.

Now besides these two we have Melanies bff, who she was terrible to, and a guy she thinks is perfect for bff, and this other hella creepy guy who she dates for a while. Why? Well why not? He was hella creepy, she doesn't really like him, but when he asks her away for a weekend she goes with him. Why would you go away with creepy guy you barely know to his secluded house? Melanie sure is not the smartest of people. That and she knows he is probably using her, when Jack tells her how much he is in debt and trying to mooch off of her and stuff she gets pissed. Like so what if he is sleezy and using me, he is handsome so...I will enjoy the male attention. Oh it was grosse. Like that is just what I want. Creepy guy to date me and screw me over because he is a guy and I have no self respect and need a guys attentions even if they are creepy and I don't like them. Yey me! She dated him for WAY too long. Can you tell I really didn't care for this book?

Okay so Melanie was terrible, the secondary characters I didn't care for, Jack was meh but the best of the bunch, what else. How about the plot. So Jack thinks there is a hidden treasure in Melanie's house and when we find out the story there I rolled my eyes so hard. It didn't really make much sense to me. It seemed very improbably that what happened would have actually happened. Because no. Oh man, this book. Like I said at the beginning it was a bit of a mess for me. Really everything about it was painful to read almost. It was not good. I know you could read on and see more adventures of Melanie, but there is no way I care to do that. I don't know how I managed to get to the end of this one...