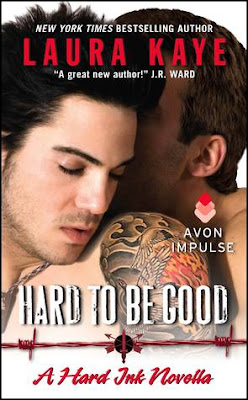 Hard Ink Tattoo owner Jeremy Rixey has taken on his brother’s stateside fight against the forces that nearly killed Nick and his Special Forces team a year before. Now, Jeremy’s whole world has been turned upside down—not the least of which by a brilliant, quiet blond man who tempts Jeremy to settle down for the first time ever.

Recent kidnapping victim Charlie Merritt has always been better with computers than people, so when he’s drawn into the SF team’s investigation of his army colonel father’s corruption, he’s surprised to find acceptance and friendship—especially since his father never accepted who Charlie was. Even more surprising is the heated tension Charlie feels with sexy, tattooed Jeremy, Charlie’s opposite in almost every way.

With tragedy and chaos all around them, temptation flashes hot, and Jeremy and Charlie can’t help but wonder why they’re trying so hard to be good...

If I am being honest then I have to tell you that when I was reading book one in this series, before I knew that you had to read these books in order, I was already hoping and wanting to read Jeremy's story. Because from the first moment you meet him in book one I loved him. So so much. Him and his t-shirts. I couldn't wait to see who he would fall for and how it would all work out. Because he was by far my favorite. Not that I don't love the other guys and girls, but there was just something about him that I loved so much.

Now once I realized I had to read these books in order I looked and saw I had to wait until after the third book to get his story I pretty much did nothing but read these books as fast as I could so I could get to Hard to Be Good. And oh, it did not disappoint. I loved Charlie and Jeremy so so much!

So like I said you really need to read these books in order so you know Charlie is Becca's brother who was kidnapped in book one and starts this whole mess that they are in. He was researching his father, these guys' former leader, and found information that someone doesn't want to get out. He was kidnapped and tortured but never gave up any information. And now he is staying at Jeremy's place with everyone else and trying to help figure everything out and clear the guy's names. Only he is really shy and even before he was kidnapped he didn't really venture out of his house much. His dad never approved of him being gay and he is not sure how these other military guys might handle it. Especially when he starts falling for Jeremy, the one guy's brother. He likes Jeremy, a lot, but why would someone so outgoing and fun want to be with someone like him? Oh, Charlie broke my heart. He definitely has some confidence issues, but he finally tries to work up the nerve to see if Jeremy likes him too.

Now Jeremy has like Charlie from the first moment they met, but that was when he was just rescued and not in a good place. So Jeremy doesn't want to do anything that might not be wanted especially when Charlie is still healing both physically and mentally. But then Charlie makes it clear that he might like Jeremy too and if only these two could find a moment alone to talk maybe they can both get what they want.

I loved these two. I loved how fragile yet not Charlie was. How he has lived with fear his whole life, but how he wants to try and do things even if he is afraid of them. And Jeremy and Charlie were amazing together. I was waiting for this story since I started book one and I was definitely ndisappointedned. I hope we get to see more cute Jeremy and Charlie in the last book!