Heroes Are My Weakness by Susan Elizabeth Phillips 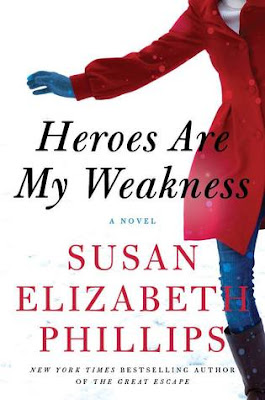 The dead of winter.

An isolated island off the coast of Maine.

A sinister house looming over the sea ...

But she's not laughing now. When she was a teenager, he terrified her. Now they're trapped together on a snowy island off the coast of Maine. Is he the villain she remembers or has he changed? Her head says no. Her heart says yes.

It's going to be a long, hot winter.

Heroes Are My Weakness was a weird read for me. Annie was...strange. And not in a good way. Really her thoughts and actions throughout didn't make that much sense to me.  *spoilers ahead*

Annie was...crazy. Like she talked to her dolls, which could be a bit much at times, but I could also understand if it was just like I would do it. But it was like she had multiple personalities, but they came out through her puppets. She had long conversations with them in her head that were more like she was talking to another personality of hers. It was kind of creepy.

Then she is also obsessed with Theo and how he is a murderer...which was also ridiculous. Like we know that he did three not so good things when he was younger, the dumbwaiter incident being the worst and still upsets Annie to this day, but the rest was meh. And now Annie is stuck on this island (if she leaves she forfeits her inheritance from her mom) and is neighbors to Theo and every time she sees him she is like oh noes! He is going to kill me!! For no reason. Like he has ample opportunity if he had wanted to to kill her, but he doesn't. And he is nice to her and she is still like he is going to kill me!! whenever she sees him. It was ridiculous. I can see being afraid at first, but after a while it was just like come on! He did those terrible things when he was younger. Maybe he grew up some and is a better person now? I mean people can change...

So Annie is stuck on this island with Theo and she would really rather stay away from him as much as she can. But she ends up helping Jayce, who works for Theo, every day. I am not sure why she was so helpful with Jayce. Like Jayce was sooooo whiny poor me, I can't do my job because my foot hurts, poor poor me, boo hoo, I want Theo, but Theo wants Annie so I probably not actually that nice to Annie because poor poor me. Jayce also has a daughter that doesn't talk so Annie is apparently also a trained professional that can "fix" her daughter! Annie kept butting in and trying to fix the daughter and I kept thinking maybe you should let her mom do what she thinks is best for her and fix your own life. You can't even handle your own problems so why would you be able to handle hers? It didn't make much sense why she could magically fix the daughter seeing as how she is not a professional or anything...

Okay so we have established that Annie was not my favorite. I didn't really understand her and she was kind of annoying. But the whole time she is going on about how terrible Theo is and how he almost killed her when she was younger, but we didn't know the details. Well let me tell you when we do find out I was like really?? That is it? Really? He didn't actually try and kill you, you almost killed yourself trying to save the puppies. I mean sure you think he put the puppies in the cave and told you to meet him there, but you could have gotten out before the water would have drowned you. I mean yeah it would have been sad to lose some of the puppies, but puppies vs my own life? I love animals, but I would save myself. So it was your own decision that almost got you killed. I expected more. I expected Theo to at least be there when you almost got yourself killed.

Oh, one more thing. She kept trying to scare Theo away, make him get off the island by trying to make him think his house was haunted. It was ridiculous and super cheesy. Like really? That is all you got? That is how you are going to try and make him think his house is haunted? It was like stuff a kid would do....so you are recovering from pneumonia (yeah I forgot she is sick when she get to the island and can't walk around a lot and stuff), but you are willing to go traipsing around in the super cold and dark just to mess with him? Are you really that afraid of him? Because it seems like risking your health (maybe your life again!) is not worth it. And if you are really afraid that he will try and kill you why would you mess with him so much in the middle of the night when it would be way easier? And if you are really afraid of him and think he is so dangerous why are you always like I need to stay away from him, but he is so hot!! Oh, look at how hot he is!! I can't stay away because the hotness it too much! I don't like that.

I did like Theo. It was obvious from the start that he is a nice person, but has some secrets. Maybe he is protecting someone or something. Like it is obvious the past is not what it seems, but he doesn't go out of his way to discourage people from thinking the worst of him. And when it was revealed what was really going on I did do a big eye roll as I wasn't a fan.

So yeah, obviously this wasn't the book for me. Maybe with a different lead character I could have enjoyed it, but Annie was too much for me.