From Sand and Ash by Amy Harmon 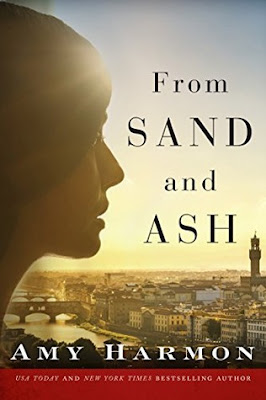 Italy, 1943—Germany occupies much of the country, placing the Jewish population in grave danger during World War II.

As children, Eva Rosselli and Angelo Bianco were raised like family but divided by circumstance and religion. As the years go by, the two find themselves falling in love. But the church calls to Angelo and, despite his deep feelings for Eva, he chooses the priesthood.

Now, more than a decade later, Angelo is a Catholic priest and Eva is a woman with nowhere to turn. With the Gestapo closing in, Angelo hides Eva within the walls of a convent, where Eva discovers she is just one of many Jews being sheltered by the Catholic Church.

But Eva can’t quietly hide, waiting for deliverance, while Angelo risks everything to keep her safe. With the world at war and so many in need, Angelo and Eva face trial after trial, choice after agonizing choice, until fate and fortune finally collide, leaving them with the most difficult decision of all.

From Sand and Ash was an okay read for me. I enjoyed it because I didn't know anything about this time period in Italy. I didn't know that the church helped shelter people and all of that. It made me want to learn more about the history there and what actually happened.

On the other hand, I didn't feel connected to any of the characters or see the love between Angelo and Eva. So if I am rating this as a romance I would rate it really low. It was not good. And the sexy time scenes, or even kissing? I didn't like them. Not sure why but they made me very uncomfortable and I skimmed my way through them when they came up.

This is the story of Eva and Angelo during WWII. They fall in love young, but nothing ever comes of it. Throughout the story Angelo is always torn, to be with Eva or to stay with the church. He needs both of them in his life, but it is hard because he can't really have both in the ways he would want. Because Angelo is with the church when the Gestapo start rounding up Jews he helps shelter them, including Eva. But she won't sit idly by and do nothing while others are facing big hardships.

Now I did have an issue with Eva and how she was pretty reckless when she was trying to help out. I kept wanting her to be a bit more careful so that she and those she cared about/was trying to help wouldn't get killed. She was so pig-headed that she would just recklessly go and do things without thought of how this might affect other people. And I didn't like that. Plus there were a few times where she was helping, I am thinking of one time in particular when the Gestapo is going apartment to apartment searching for people and rounding them up, when things happen that weren't quite believable. Like the Gestapo couldn't get in the one apartment, they tried for a bit, then just said okay there is probably no one in there? That doesn't sound like them from what I have read and seen of the history of the time...

So throughout the story, we get to see a glimpse into what it was like in Italy during WWII. Now it was a bit...I don't know if sugarcoated is the right word, but maybe too simplistic? Not as bad as it really was? I have a friend who is from Italy and she read this and was talking about what it was actually like and it seems terrible. Like food shortages. I never got the real impression that there was a huge food shortage. That people were starving because they didn't have enough to eat. Food was mentioned at times, but it never seemed to be a dire situation. It was casually mentioned how someone lost weight and that is hinting at it, but it was all simplified or not commented on so it didn't seem as bad as I am sure it was. Still an interesting read because I learned about a side of history I didn't know about.