Burning Up (Flirting with Fire #1) by Jennifer Blackwood 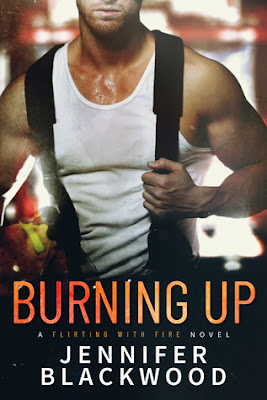 Unemployed schoolteacher Erin Jenkins is back in Portland, the town she hasn’t called home for more than a decade. It’s not the way she wants to spend her last days of summer: in between jobs and avoiding her mother’s snooping by escaping to the ice-cream aisle. But when the opportunity arises for her to accompany her brother’s best friend—her lifetime crush—to a wedding, summer gets a whole lot more interesting.

Firefighter and single dad Jake Bennett has built a nice, safe wall around his heart—no romance, no getting burned. That doesn’t mean he’s ruling out a fling. Considering Erin’s visit is temporary, they’re the perfect fit for a scorching no-strings one-night stand. Or two. Or five. Until the worst thing happens: Erin and Jake are feeling more. Damn that four-letter word.

Now their hearts are on the line, and when their smoldering summer comes to a close, it’s going to be harder than ever to put out the fire.

Burning Up wasn't quite the story I was expecting, but I loved it! Erin and Jake were great together and add in his daughter and it was awesome.

Erin ran away from Portland as soon as she could. She had to get out of there and never really wanted to come back. It was too suffocating for her with her family always in her business. So she got out and moved to CA and is a teacher there, but, unfortunately, she lost her job and is trying to find a new one without much luck. When her mom has surgery and needs some help for the summer Erin reluctantly heads home to help out.

Jake is a single dad who is adamant he is not going to date until his daughter, Bailey, is out of the house. He tried it once and it didn't work out and hurt Bailey so he will just wait until she is older. Besides he doesn't have the best of luck with women sticking around.

Jake and Erin were awesome together. When Jake needs someone to accompany him to his sister's wedding and he sees Erin he invites her. And then things turn fun because they both are super attracted to the other, but Erin is not staying and Jake has Bailey to think about. Plus Erin's brother is his fellow firefighter and he doesn't want to get in trouble with his best friend for hooking up with his friend's sister. Because that is all it could be, a hookup. They certainly had the chemistry between them, they were super hot together, but they also like each other. You can see how much they really care, it is just a not so good situation. With Erin needing to get out of Portland and Jake having a life there it was like will they be able to work this out? I wanted them to so much because they are perfect together, but I also understand Erin and her need to get out of her hometown. I did the same as her when I was younger, though not for the same reasons. It was fun getting to know these characters and watching them grow together.