Romancing the Duke (Castles Ever After #1) by Tessa Dare 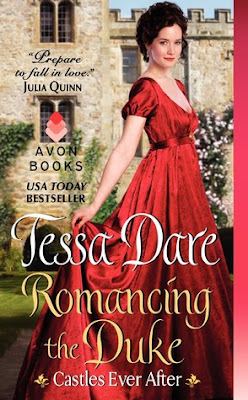 In the first in Tessa Dare's captivating Castles Ever After series, a mysterious fortress is the setting for an unlikely love . . .

As the daughter of a famed author, Isolde Ophelia Goodnight grew up on tales of brave knights and fair maidens. She never doubted romance would be in her future, too. The storybooks offered endless possibilities.

And as she grew older, Izzy crossed them off. One by one by one.

Rescued from drudgery by charming prince?
No, no, and… Heh.

Now Izzy’s given up yearning for romance. She’ll settle for a roof over her head. What fairy tales are left over for an impoverished twenty-six year-old woman who’s never even been kissed?

Romancing the Duke was such a fun read! Why haven't I read Tessa Dare before now? Well, probably because I don't like the covers. Really I don't like the covers of most old-timey books even though I love old-timey books in general. I am glad I gave Tessa Dare a chance. This definitely definitely won't be my last (I may or may not have already put every other book of hers on my hold list at the library...)

Izzy has been struggling to get by. She is almost completely out of money, she has nothing since her father's sudden passing, and no one to really help her out. She has been trying to survive, but it is hard. So when she receives a letter stating that she received an inheritance from someone she is hoping for a few hundred pounds to help her get by. She doesn't expect to show up at a decrepit castle with a grumbly, handsome man living in it having no idea what she is talking about. She definitely didn't expect to inherit the castle itself and have to fight the grumbly man for it.

Ransom is a Duke, but he has been holed up in his castle almost completely by himself for the past 7 months. Ever since the accident. Or whatever happened to him. He is rough around the edges, but you can see he cares, he just doesn't want to show it. With his past and upbringing it is no wonder he is not the kind, caring person that he could be. That he is in secret. Oh, I loved Ransom so much! I love the big, tough, grumbly teddy bears. Oh, he was fun.

Ramson and Izzy were awesome together. He keeps trying to run her off with threats of ruining her, but he doesn't realize that Izzy wants that. She has dreamed of love and kisses and everything like that her whole life, but everyone treats her as a little girl because of the fairy tales her father wrote. The fairy tales that are incredibly popular, that everyone loved. She is so kind to the fans of her father's stories. So kind to all the people who ask her the same questions since the stories were cut off mid-scene when he died unexpectedly! They all want to know what happens next, but there is no next now. So when Ransom actually treats her like a woman and not a little girl as everyone else does she loves it. She wants more of it.

With the two of them stuck in the castle together and drawn together it was only a matter of time because dratted feelings start getting involved. Neither of them expected it, both think the other couldn't possibly care for them, but they were so sweet together. Ransom has a great deal of pride and doesn't want anyone's help, but he is so kind with Izzy. So...everything. They both were. Not that it is easy. They are both stubborn and want what they want and they were so much fun to watch. I loved this story and can't wait to read more from this new to me author!