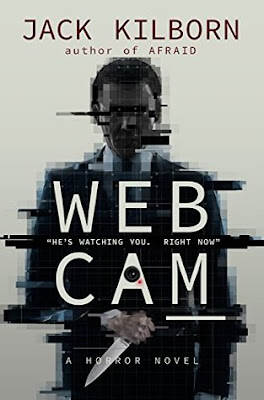 Someone is stalking webcam models.

He lurks in the untouchable recesses of the black web.

When watching is no longer enough, he comes calling.

He's the last thing you'll ever see before the blood gets in your eyes.

Chicago Homicide Detective Tom Mankowski (The List, Haunted House) is no stranger to homicidal maniacs. But this one is the worst he's ever chased, with an agenda that will make even the most diehard horror reader turn on all their lights, and switch off all Internet, wifi, computers, and electronic devices.

Jack Kilborn reaches down into the depths of depravity and drags the terror novel kicking and cyber-screaming into the 21st century.

WEBCAM
I'm texting you from inside your closet. Wanna play? :)

The Konrath/Kilborn Collective is not a series. It's an ongoing collection of horror and technothriller novels that can each be read as a standalone. Some feature characters who appear in more than one story.

If you are a more sensitive (or adventurous) reader, the Konrath/Kilborn scale rates specific categories from 1 (lowest) to 10 (highest) to give you some idea if this is your kind of book.

I love Jack Kilborn's books. The Afraid books are some of my all time favorites. So that is the kind of story I was expecting from this book. I haven't read any of the Jack Daniels or other of the authors mystery books, but they are on my list of to-read. Though after this one I might reconsider as I am not sure I like the way he writes the character interactions and conversations.

Webcam is the story of a serial killer who is stalking and killing webcam girls named Kendall. He thinks he is saving their souls or something. Making them pay for their sins. And I wish we could have had more of the killer. More of what he did and what made him him. That was why I picked up this book to read for Halloween. I wanted a scary, horrifying read and I got glimpses of the book I wanted. The killer himself, the descriptions of the murder scenes and everything was shudder inducing. I cannot imagine what those girls went through. Seriously this author can make up some truly horrifying situatuins. And I  love it.

But most of the book felt like it was about the detective, Tom, and how he is in love with his long distance girlfriend who is visiting. How he shouldn't be working, but he has to. How she gets upset that he leaves to do his job while she is there. How he wants to marry her, but they have an agreement that neither will ask the other to give up their jobs or move to be with the other. Their whole storyline? Well I will say this - maybe romance is not the authors strong suit. It didn't feel real. I never got any emotions between the two of them. I was told they were in love. I was told she would get upset or he would feel bad, but I didn't see it. I didn't feel it. I didn't care about them at all. So it wasn't that great. If I don't care what happens to your main characters then if something bad happens it is no big deal.

You also have the story of one of the Kendall's the killer is stalking. His next victim. I liked those parts more than the detective's part. I liked that she is not actually who the killer goes for. She is not his normal victim. She thinks she might be crazy and making it all up. That was fun and I could have done with a bit more of it. The stalking was pretty creepy.

Now as I said most of the book is focused on Tom and his investigation and how it affected his love life. The writing in those parts was not very good for me. It was stilted and just not what I expected from this author. I was still enjoying it well enough, but then I realized I only had a few minutes left in the book and a situation that had yet to be resolved and the whole ending felt very rushed. Like suddenly everything worked out tada! It didn't help with the meh feeling of the story when it felt like it wasn't fully flushed out at the end. Oh well. I have the other Afraid books to re-read when I want my horrifying situation fix.