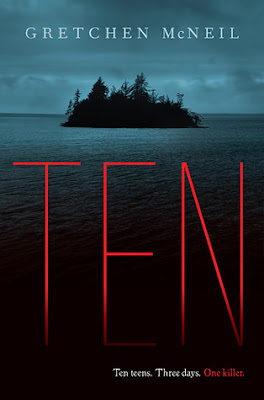 Shhhh! Don't spread the word! Three-day weekend. Party at White Rock House on Henry Island. You do not want to miss it.

It was supposed to be the weekend of their lives—an exclusive house party on Henry Island. Best friends Meg and Minnie each have their reasons for being there (which involve T.J., the school’s most eligible bachelor) and look forward to three glorious days of boys, booze and fun-filled luxury.

But what they expect is definitely not what they get, and what starts out as fun turns dark and twisted after the discovery of a DVD with a sinister message: Vengeance is mine.

Suddenly people are dying, and with a storm raging, the teens are cut off from the outside world. No electricity, no phones, no internet, and a ferry that isn’t scheduled to return for two days. As the deaths become more violent and the teens turn on each other, can Meg find the killer before more people die? Or is the killer closer to her than she could ever imagine?

Ten was a meh read for me. I haven't read And Then There Were None, so I am not familiar with the source material people referenced in other reviews, so I just have this story to go on. And it was just okay. I didn't hate it, but it was nothing special either. Meh.

Meg and her bestie Minnie are going to a house party on a secluded island. For three days. And no one knows they are there. Meg is our main character, the person through whom we see the story unfold and she was just blah. She puts up with way too much abuse from Minnie because Minnie has mental health issues? It was not good. Minnie was horrible to Meg and Meg had to constantly deny herself things because poor poor Minnie. Ugh. I don't really know why she stuck by her friend so much. I know they have been friends forever, but there is only so much abuse I would put up with so...when you are counting down the days until you can leave your "friend" behind and start your life again maybe that should be a red flag.

Now Meg and Minnie both like this one boy TJ. And of course TJ likes Meg so she has to deny herself being with him because of Minnie. And Minnie sleeps around trying to get TJ to notice her. So it was...I don't know why Meg had to stay away. Minnie was a bit crazy and not a good friend at all. And who also ends up on the island? TJ! And a bunch of other people who I don't really know or learn that much about. Really 10 people was a lot to start with and I am terrible with names anyway, but it didn't really matter. The 10 people in the house for a party weekend start having fun, but then the bodies start piling up. Someone is killing everyone and they don't have a way to get off the island/contact anyone to get help. So they are going to have to figure this out for themselves before they all die.

Now the murder mystery part was okay, but not great. The characters didn't really react like I would have imagined. They didn't seem to be as upset/terrified as I would have imagined, but it was alright. A light summer murder mystery book with a bit of a forbidden romance thrown in. Really it felt like mostly Meg and TJ trying to work things out and then a bit of people dying and trying to find help/a way off the island. As I said the story was alright, but the end? A bit lame. I...I won't ruin it but it was disappointing how it ends. Overall it was a forgettable book. Not terrible, but not something I will reread or think about again.