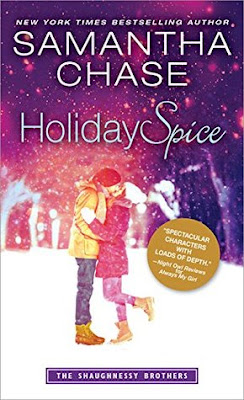 Darcy Shaughnessy has gotten used to her overbearing brothers chasing away any man she wants to date. But a chance meeting with a brooding -- and deliciously handsome -- artist is about to make this holiday season one to remember.

There's only one thing Benjamin Tanner loves more than his woodcarving: solitude. Then he gets snowed in with Darcy in his cozy cabin in the woods, and their heated feelings begin to melt the icy barrier between them.

With Ben's need for privacy and Darcy's love of family and social life, will opposites still attract once the snow clears and the holiday festivities come to an end?

I always enjoy a Samantha Chase story and Holiday Spice was no different. I love the Shaughnessy's, but...well Darcy isn't my favorite. It is fine, I still really enjoyed the story. It was cute and fun and everything I love about the author's books, but she still isn't my favorite. I like her I just don't love her like I do her brothers. I think it is hard sometimes to write reviews for authors that you read a lot of. Sometimes there is just a character or story that there is nothing wrong with, you enjoy it, but at the same time you keep thinking of other books/characters you enjoyed more from them so then I think it comes across as not really liking this story when I did. Just not as much as some of the prior books in this series. It's still a good read.

Darcy feels really young to me in a way that I don't care for. Her brothers and family are a bit overbearing, want her to figure her life out and find a job and whatnot, but she doesn't know what she wants to do. She tries, she really does. She goes from job to job because nothing is fitting her the way she wants it to. And that is fine, but she also has some unresolved issues with her past which cause problems. And she is super stubborn, a bit insecure, and used to people bending over backward for her if she makes a big deal out of something. She is used to not having to work for things because her family lets her get away with not having to. So she comea across as really young when she meets someone who doesn't bend over backward for her. Who makes her work for things. Who doesn't just let her do whatever without challenging her.

Ben is happy living a recluse life. He lives in his cabin out in the woods with no one around and that is the way he likes it. He works in his workshop, makes enough money to support himself (and take care of his brothers when they were younger and needed him), and that is enough for him. He can be a bit grumbly, but he is a good guy.

When Ben first meets Darcy he is interested in her. Which is odd. Because he usually isn't interested in anyone. And things seem to be going well until suddenly Darcy has a problem with him. They are going to be working together for a few days so he is racking his brain trying to figure out what happened. One moment she is open and fun with him, the next she seems to hate him. And he can't figure out why.

Now see this is where I didn't care for Darcy. She jumps to conclusions and even when people point out she is wrong she is stubborn and sticks to her false assumptions. She just wasn't my favorite. I know she is used to jumping into things without thinking and she has her insecurities, but gah! Ben is such a great guy and she keeps trying to mess things up before they can even start. It was like if she could just get out of her own way they may be able to have something special between them.

Now these two don't have an easy go of it. Besides Darcy getting in her own way they both have baggage they need to deal with. And figure out how to find a compromise where they can both be happy. Darcy loves her family and is very close with them and Ben loves his family but doesn't talk to them much. She loves parties and people and he prefers to be alone. Can the two of them figure out a way to merge their two lives so neither of them ends up resenting the other? It was fun watching them come together even if Darcy was frustrating at times. I still wanted everything for Ben because he was pretty awesome.