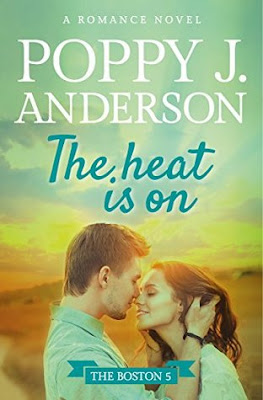 When Hayden's fiancé breaks off their engagement, Hayden’s whole world falls apart. After all, she has loved Heath Fitzpatrick since they were children. Though she can hardly believe he really wants the breakup, she picks up the pieces of her life and tries to accept the new situation.

But her efforts are thwarted time and again by the rest of the Fitzpatrick clan, who have always been part of her life—and who are notorious for being outspoken, persistent, and downright meddlesome. None of Heath's siblings are above adding their own two cents. Or twenty.

Even Heath himself, a daring firefighter, seems to be having trouble adjusting to his new single life. So how in the world is Hayden supposed to move on, forget the plans they made for the future, and get Heath off her mind? And even more difficult—she'll need to banish him from her heart, forever.

The Heat is On was an alright read, but everything happened too quickly, was told to me, and was resolved without much fuss. It was an okay read, but I wanted more. Some slight spoilers ahead

Something bad happened not too long ago that has shaken up the Fitzpatrick clan. Heath especially. His world has fallen apart and he is not dealing well. He is pushing everyone away, especially Hayden his ex-fiance. He just can't seem to get it together.

Hayden had been trying to not give up on Heath, but he has gone too far. Apparently he doesn't love her anymore. Apparently he really does want this breakup. It is killing her, but she has to face the facts. It is time to try and move on, but how is she going to do that?

Now it is obvious they both still love each other, but the story was a bit...I didn't connect with either of them really, with anyone, so It was just a light read. And Heath did and said some really not cool things to Hayden. Things that man...it would have taken a lot to get on my good side again if someone said this to me. And the end? When Heath finally realizes he is messing everything up and need to make it better? That was way too easy. He just suddenly changes his ways and everything works out fine. He says one thing and Hayden forgives him. It was just...not that good. Way too easy and quick and just an okay fluff kind of read. I wish it would have been a bit more. If I could have connected with the characters or things didn't suddenly resolve themselves it would have been better.