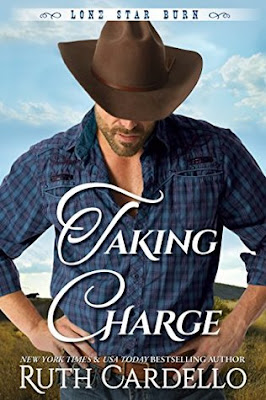 Lucy Albright never wanted her family’s Texas ranch, but now it’s in foreclosure. She’s already lost so much she can’t bear the thought of losing one more thing. Lucy learned the hard way not to accept help from a man when there are strings attached, so she’ll do whatever it takes to save the ranch on her own terms—even if that means launching an online business marketing high-¬tech sex toys.

Ranch manager David Harmon has a reputation for being a cowboy with a heart of gold. Even if she refuses his help, down-and-out Lucy is the kind of woman he’ll do anything to protect. And while David may not know much about Lucy’s naughty side business, that won’t stop a cowboy from doing something he’s set his mind to.

With the ranch threatened by a scheming neighbor, Lucy can’t help but keep David around. Their attraction may be undeniable, but will the spark between them burn her entire future to the ground?

Taking Charge was not my favorite read. I never understood the main character and why she did what she did, didn't like the whole men must solve the problems and keep the poor little ladies at home, it just wasn't the book for me.

Lucy never wanted to run her family's ranch, but now she is all that is left. She lost both her parents and her brother has run off leaving her to keep everything afloat. It is hard work, she doesn't love it, but she also can't bear to part with the last piece of her family she has left.

David is a really great guy who wants to be there for Lucy. When he first meets her he is smitten. He wants to get to know her better, but she is not in a good place so he bides his time. Only she goes and does something pretty stupid and he loses his chance...at least until a new one arrises. He is not going to waste his second chance with Lucy, the women he is going to marry.

Now I didn't really understand Lucy at all in this book. She talks a lot about how she is afraid now, how she never used to be, how she used to live life how she wanted. How she cannot ask anyone for help because...I guess cause she lost her parents and her brother went dark and everyone leaves? I can understand that when the story makes me believe that is the way the character feels. I was told Lucy felt this way, but I didn't really see it. She didn't make much sense to me. She tries her hardest to stay away from David as...I don't know. She just had a not so good situation so I can see being gun shy, but he is there and your friends have known him forever and know he is a great guy. So...I didn't really understand the way it was written why she was the way she was. That and she is so embarrassed by her online business that she doesn't want anyone to know. If David found out what she was selling he would hate her forever and never want to be with her because...well I don't know why. But by the way she was always so embarrassed by it I kept thinking maybe you should find something else to sell from your house? I don't know. Part of that could just be me not thinking it was a big deal at all, but it annoyed me.

The other big issue I had with the story was that Lucy has someone who is out to get her, who wants her ranch, but David will do anything he can to protect her. Even shipping her off to another town so the womenfolk won't be around when the bad stuff goes down. Yeah, I would have been so so so angry if someone tried to shuttle me off somewhere else so I would be safe. So I could let the big strong men take care of us poor weak women. No. No. No. The way it was written I was just like nope. Not cool.

Overall this wasn't the book for me. The writing didn't make me connect with Lucy or understand her so it was not the best read.