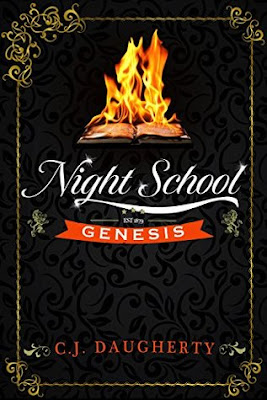 Allie Sheridan’s world is falling apart. Her brother’s run away from home. Her parents ignore her. And she’s just been arrested.

This time her parents have had enough. They cut her off from her friends and send her away to boarding school, far from her London friends.

But at Cimmeria Academy, Allie is soon caught up in the strange activities of a secret group of elite students.

When she’s attacked late one night the incident sets off a chain of increasingly violent events. As the school begins to seem like a very dangerous place, she finds out that nothing at Cimmeria is what it seems to be.

And that she is not who she thought she was.

Night School started off fun and I was interested in seeing where it was going and what was really going on, but then it dragged on and on and on. *spoilers ahead*

I started reading it interested in Allie. She keeps getting in trouble with the law and so her parents send her to a boarding school she has never heard of in the middle of nowhere. They don't have any technology there, no cell phones, no tv, nothing. She instantly makes some friends and seems to fit in and like it there even though it is completely different from what she is used to, which is odd that she doesn't mind not being able to call her friends back home that she apparently cares so much about, but I let it slide. It was fine. And pretty instantly we set up a love triangle with a dark, brooding guy and a creepy rich guy who is super popular.

So while I was reading this I was trying to figure out what was going on. I really thought this was going to be a paranormal book as it seems like it would be. So many things happened that people tried to brush aside as nothing, but seemed like maybe it was a werewolf or vampires or something. Like when Allie arrives at the school the schoolmaster says you can't leave the grounds without their permission and it made it seem like you literally couldn't leave the grounds, not that you are just not allowed. That and no going in the woods alone or after dark because they are dangerous. Like what is in the woods that is so dangerous? Allie keeps running into things or being creeped out so I was really interested to see why. What is going on?

Then the book drags on and on and on with Allie not being told anything, odd things keep happening, and it keeps looking more and more like the kids in Night School are paranormal somehow. But they aren't. It felt like I had to wait forever to find out what is actually happening and I wish there would have been some actual clues sooner or something. Plus when I found out what it was, when brooding guy actually told Allie even though no one is supposed to know outside of Night School, I think I said aloud "You have got to be kidding me! Seriously?? This is sooooo lame!!" It was such a disappointment and didn't really make sense in the grand scheme of things. Like some of the odd things that happened I was thinking about later, some that were never brought up again, and was just like but what about that? Why could person x do this? Or why did this happen? Or whatever. It....it wasn't good. So I felt like I read most of the book just to see what is happening only to be very disappointed.

Besides the storyline being slow and disappointing the other thing that bothered me was creepy rich guy. He was not cool at all pretty much right from the beginning. And he really made me think there was paranormal going on. He would say something to Allie, tell her to do something, and she just would even though just before or later she would say I shouldn't or wonder why she did. It made it seem like he could control her with his words, tell her to do something and she would just do it because he said. So I was waiting for the reveal that he was whatever and could make you do whatever he wanted.

Then there is a big dance and Allie is so excited to go with creepy guy even though she keeps thinking of brooding guy (yeah she is one of those going with the one guy even though she obviously likes another guy more girls) and creepy guy keeps giving her drinks and telling her to finish them quickly so she would and she gets really wasted. So much so that later she thinks that creepy guy spiked her drinks as she was way more wasted than she should have been, but everyone just keeps saying the wine is really strong at this school...which why? Why do they have incredibly strong wine they are giving to kids?? That doesn't make much sense to me unless it is some paranormal thing and Allie was drinking the wrong wine as the strong stuff is just for the "others" as it doesn't affect them as much or something. Anyways Allie is really wasted and creepy guy pulls her aside and is trying to make out with her and go farther, but she is all no! Stop! And he doesn't. He starts strangling her so she can barely breathe and is all tell me you are mine!!! It was super creepy and I again thought oh there must be something to this. Like if she says she is his to appease him it will really bond her to him and she can never get away or something. That is the way everyone talked about it, but nope. He would just be happier and she could take it back once she got away if she wanted so...it was odd.

So yeah creepy guy is strangling Allie and trying to rape her while wanting her to tell her she is his and it was sooooo not cool. Luckily brooding guy shows up and saves her. So you would think Allie wouldn't want anything to do with creepy guy or would report him or something? Nope. I know someone died shortly after, but still. She should at least have not spoken to him again or stayed away from him. Instead she is just like that was the worst date ever! We are through! And later he apologizes with a "Sorry I forgot you are not like the other girls here and I can't treat you like I treat them" apology. Like what the actual f? So you rape other girls and almost choke them to death when they don't want it? And you just forgot you shouldn't treat this particular girl that way? You are awesome! And what does Allie do? First tells him he shouldn't treat any women like that, which is good, but I wanted more, and then forgives him. Yey! We are all friends now. Um seriously? You are just going to be friends with your would be rapist? Really?!? Oh, one other things, broody guy totally victim blames Allie afterward. He was all I told you creepy guy wasn't good! It is your fault you drank so much and went with him alone in a dark corner!! And she is just like I know! I am so angry with myself! It is my fault! BS! Complete BS!! Sorry, but rape and victim blaming and treating it like it is no big deal and we can all live happily ever after with our rapist is totally not cool!! I know creepy guy didn't rape her, but if brooding guy wouldn't have shown up he would have. And it would have been all Allie's fault according to the book. No. Just no. This is a young adults series. We don't need to be teaching our girls that if you are sexually assaulted it is your fault. No. Not cool.

So yeah, this book was not very good. It made me very angry at times, it victim blames, Allie is incredibly stupid, and it was a long frustrating read. Did not like, will not be reading any more. It was bad.