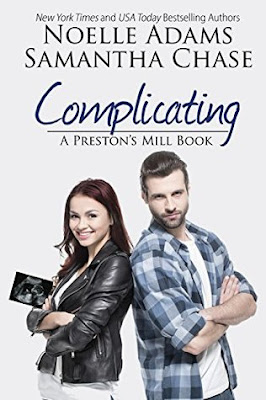 Forget all those other accidental pregnancy romances you might have read.

Daisy and Carter don't have a one-night stand...because it's thirty minutes in a back room at a wedding reception. And Carter isn't a bad boy baby-daddy...except for the motorcycle, tattoos, and attitude. Daisy doesn't have the typical issues with her pregnancy...if you don't count the morning sickness, food cravings, and occasional horniness. And Carter doesn't hang around all the time, wanting both her and the baby...until he falls in love.

But they definitely don't become a happy family...right away.

Daisy has always been a good girl. She's never done anything wild or spontaneous until she has a little too much to drink at a wedding and has a fling with a sexy stranger. She thought they were careful, but accidents happen. And now she's going to have the baby of a man she barely knows.

Carter is her opposite in every way and completely the wrong man for her. They can still work out a reasonable arrangement regarding the baby. But the more time she spends with him, the less reasonable she feels. And he's acting all possessive and protective, so it gets harder and harder to convince herself that he's just the father of her baby.

She wants him to be so much more.

Complicating was a cute read. I love both authors, their books are always fun, and this was a perfect summer read.

Daisy is a good girl. She lives in a small town where everyone knows everyone and she never does anything crazy. She wouldn't want the people in town to talk or be disappointed in her. Only she doesn't plan on Carter.

Carter is a tattooed biker who seems to be the exact opposite of Daisy. He looks rough and tough and doesn't care what anyone thinks of him. He is who he is and that is that.

When Carter and Daisy first meet at a friends wedding neither expected anything to happen. Carter noticed her right away, and Daisy noticed him, but without the help of Daisy's friend daring her to chat up guys, including Carter, they probably never would have met. They never would have sat and talked forever and connected. And Daisy definitely wouldn't have had a fling in the back room! Once she realized what she had done she doesn't stick around. She doesn't even really know who Carter is!

Now Daisy actually likes Carter. Like there could have been something there, but of course things don't turn out the way she had planned. Or didn't plan. Or whatever. She ends up pregnant! Which...she was not prepared for, but she is happy to be having a baby even if it is not the conventional way, after she is married with someone she loves.

Carter really liked Daisy. She rushed out on him so fast he couldn't get her info, but afterward, he finds himself at his friends place trying to subtly get information out of him. He wants to find her and see if maybe they do have something there. Only when he runs into her she acts like it is the worst thing ever and that she wants nothing to do with him. I loved Carter. He is who he is, he is super sweet and kind and he was the best. As soon as he found out Daisy was pregnant he wanted to be there for her and the baby...only Daisy doesn't want him there. Or she does, but she doesn't want him to feel like now he is stuck with her. Oh, these two. They were so cute together. Carter is wonderful, doing whatever Daisy will let him and even some that she won't. He just wants to help her and make things easier on her. And through it all they grow closer and closer. It was so cute! I loved them.

Of course they have their ups and downs. Daisy doesn't know what the town will think of Carter much less her parents. And would he consider moving to her small town? To be closer to their child? And maybe her? Can he change enough to fit in? Does she want him to? Oh, Daisy had a lot of things to work through, her heart might be in the right place but she doesn't always go about things the right way. And Carter doesn't always react the way he should or she would like him to. From misunderstandings to feelings getting hurt it wasn't easy to make it to happily ever after. Especially not with a baby on the way, but they were adorable and I loved them both. Another great read from these authors.