Experience the world’s most enchanting and timeless love story—retold with a dark and realistic twist.

A BEAST LIVING IN THE SHADOW OF HIS PAST

Reclusive and severely scarred Prince Adam Delacroix has remained hidden inside a secluded, decrepit castle ever since he witnessed his family’s brutal massacre. Cloaked in shadow, with only the lamentations of past ghosts for company, he has abandoned all hope, allowing the world to believe he died on that tragic eve twenty-five years ago.

A BEAUTY IN PURSUIT OF A BETTER FUTURE

Caught in a fierce snowstorm, beautiful and strong-willed Isabelle Rose seeks shelter at a castle—unaware that its beastly and disfigured master is much more than he appears to be. When he imprisons her gravely ill and blind father, she bravely offers herself in his place.

BEAUTY AND THE BEAST

Stripped of his emotional defenses, Adam’s humanity reawakens as he encounters a kindred soul in Isabelle. Together they will wade through darkness and discover beauty and passion in the most unlikely of places. But when a monster from Isabelle’s former life threatens their new love, Demrov’s forgotten prince must emerge from his shadows and face the world once more…

Perfect for fans of Beauty and the Beast and The Phantom of the Opera, Beauty of the Beast brings a familiar and well-loved fairy tale to life with a rich setting in the kingdom of Demrov and a captivating, Gothic voice.

Beauty of the Beast is the first standalone installment in a series of classic fairy tales reimagined with a dark and realistic twist.

Disclaimer: This is an edgy retelling of the classic fairy tale. Due to strong sexual content, profanity, and dark subject matter, including an instance of sexual assault committed by the villain, Beauty of the Beast is not intended for readers under the age of 18. 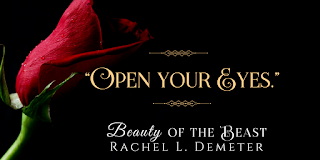 Arms sprang out from the darkness. They spun her full circle and slammed her body against the king’s portrait. Isabelle gasped, more in shock than from pain, as she stared into Adam’s deformed face. The lantern flickered behind his massive form, casting his cloaked body in silhouette. But she saw enough to know he was far from pleased. Rage and frustration radiated from his body like a palpable force.

“I warned you to stay out of here,” he said, his voice dangerously cold and deep. Those rugged vocals vibrated against her body and seeped into her marrow. “What part of forbidden didn’t you comprehend?” His voice lashed out from the darkness like a hurtled knife, and the word “forbidden” seemed to whisper another meaning altogether. Isabelle tried to answer but failed to find her voice. Indeed, her vocal cords had turned to solid ice, as numb and cold as the blood rushing through her veins. She couldn’t breathe; she felt like she was suffocating.

“My mother gave me that musical box on my fourth birthday,” he said, the sensual lull of his voice causing the fine hairs on her nape to stand erect. “And now your recklessness has destroyed it. Have you nothing to say?”

“I—I’m sorry.” He offered no reply; only the ragged sound of his breathing and the hammering blizzard broke the silence. “Please—I didn’t mean any harm.”

She struggled under the weight of Adam’s colossal body and battled to free herself. He merely gave a low chuckle and pressed her firmly against the portrait. He looked otherworldly at that moment, like an angel of death seeking vengeance. Both beautiful and monstrous, his cool, sapphire eyes overflowed with warring emotions. In spite of his harsh and ruthless exterior, she detected a quaver in his voice and saw that his large, cloaked shoulders trembled. The darkness in his soul cast a shadow that embraced her; as she peered up at him, she knew he was drowning in the turbulent waters of a past time.

“What a disappointment,” he went on, his voice growing deeper still, mocking her words from so many days ago, “You’re like any other woman.”

“I—I’m sorry. Please, Adam. I—” Her gaze shot past his body and over the wreckage of a past life. She thought of her private chamber again—of the stale perfumes and outdated garments.

Her flight or fight instinct seized hold of her. She attempted to scramble free, but he merely grabbed her shoulder and whirled her back against the portrait. Gloves wrapped his hands; his long, silk-clad fingers grasped her shoulder and kept her firmly in place.

As close as Raphael had been that night.

Hands like two steel bands held her wrists in place. Hot breaths, which faintly smelled of wine, seared her cheeks and assaulted her senses. Her breasts flattened against the pressure of his strong chest, and she felt that same chest swell and deflate in perfect sync with her own. One large hand slipped down her elbow and glided across her extended arm. The lush material of his gloves drew a shudder from her heaving chest. His breathing grew more ragged, shallower, and the erratic beat of his heart banged against her own.

Anger and desire warred on his face, twisting his features into a mess of both monster and man. “Find anything of interest, aside from my musical box? Come, come. You went through such great trouble to get here,” he asked, his voice now threaded with both anger and something else.

Yes, Isabelle recognized that something else. It was the same note that had entered Raphael’s voice that night…

She attempted to duck under his arm, but he moved swiftly, capturing her in the crook of his elbow. Reeling her toward him, he emitted a low, haunting chuckle that swelled the eastern tower to its rafters. She was back where she’d started—pinned against the portrait, Adam’s body serving as a flesh-and-blood blockade.

Hunger radiated from him, enfolding her in a current of sizzling power. His silk-clad hand grazed the curve of her breast as it moved down her body in a painfully slow caress. Even more alarming was her reaction to him. Her treacherous body responded with a crush of hot and cold pulsating waves. Then he whispered a taunt in her ear, and his liquid baritone slid down her backbone like honey; it swirled inside her, finding its home in her most intimate area.

He leaned closer still. His face’s uneven skin brushed against her neck, the black waves of his hair tickled her chin... His thick arousal expanded against her, reminding her of what he was capable of—and of her sheer vulnerability.

His lips teased the base of her throat. Cursing her traitorous body, Isabelle gasped at the gentle scraping of his teeth. His tongue and lips tormented her throbbing pulse—just barely, stirring her skin in a mere ghost of a touch.

Rachel L. Demeter lives in the beautiful hills of Anaheim, California with Teddy, her goofy lowland sheepdog, and her high school sweetheart of fourteen years. She enjoys writing poignant romances that challenge the reader’s emotions and explore the redeeming power of love.

Imagining dynamic worlds and characters has been Rachel’s passion for longer than she can remember. Before learning how to read or write, she would dictate stories while her mother would record them for her. She holds a special affinity for the tortured hero and unconventional romances. Whether crafting the protagonist or antagonist, she ensures every character is given a soul.

Rachel endeavors to defy conventions by blending elements of romance, suspense, and horror. Some themes her stories never stray too far from: forbidden romance, soul mates, the power of love to redeem, mend all wounds, and triumph over darkness.

Her dream is to move readers and leave an emotional impact through her words.