At Any Price (Gaming the System #1) by Brenna Aubrey 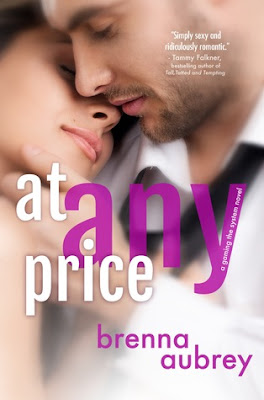 When Mia Strong, proud geek-girl and popular gaming blogger, auctions off her virginity online, she knows she'll make waves. But what she will not be making is a love connection. Her rules are set in stone: One night. No further contact.

It's a desperate step, but it's the only way she can go to medical school and pay her mother's mounting hospital bills.

Adam Drake, the enigmatic auction winner, is a software prodigy who made his first million at seventeen. Now, in his mid-twenties, he's sexy, driven and--as CEO of his own gaming company--he's used to making the rules. Before Mia knows what's happening, he's found the loophole in the rules of her auction. Every stipulation she's made to protect her heart gets tossed by the wayside.

This New Adult book is intended for readers over the age of 18 due to adult language, sexual content and adult situations.

At Any Price was an okay read. I enjoyed it even though there were things that really bugged me about it. Overall a good read, not a great read.

Mia is a geek girl. She plays video games and has a popular gamer blog. When she needs some money she posts her Virgin Manifesto and decides to sell her virginity to the highest bidder to take back control or something. Her bff is against the idea, but helping her out with it. She is determined to do this, to sleep with someone for one night then never see them again. She just wants to get it over with and then she will have money for medical school and everything else she needs.

Adam is a millionaire who owns the company who makes Mia's favorite game. He is also the winner of her virginity auction and when they first meet there is a spark between them. Only he acts like a jerk and she is not sure she can go through with it. She is afraid as she has never responded like that to someone before. She had a jerk boyfriend in high school, one who sexually assaulted her, and she has not gotten over that. She went to therapy, but it is still there. She doesn't date, doesn't want to get close to someone, just wants to be left alone to her own devices. Now here is a bit of the the things that bug me. She was very much all guys are terrible and will hurt her, even though her bff is a guy. He is a guys guy so...I guess he doesn't count as a guy? I don't know. She has a lot of issues with men outside of her sexual assault. She was just all kinds of messed up and a coward most of the time. I don't like that. I like strong women. I like people who work to get over their issues and become stronger. I didn't really see Mia doing this. I saw her trying to hide for most of the book. I know it is difficult to deal with things and everyone does so differently, but this was just eh for me.

Adam was alright. I didn't mind him too much, and I usually don't like rich guys in my stories. He just came across as a normal dude who happened to be rich. He kept putting off sleeping with Mia to get to know her more as he obviously likes her. Really it was obvious from the start who he was even if Mia never once considered it. Really the whole story was very predictable. I saw everything coming a mile away so it was just okay. I don't know why Mia didn't see some of it, especially the one thing that happens at the end. It is just like why did you not even consider this? I don't get it. You are smarter than this. At least I thought you were.

So it was an alright read. Adam tries to slowly get to know Mia and get her to let him in. Only she is afraid to really be with him even if not being with him hurts her. I...she was frustrating to read. There was also a lot of generalizations which I generally don't like. Like you can't be a geek - you have muscles! Geeks don't have muscles! Stuff like that. Like as a girl you can't talk to geeks as they will just stare at your chest and whatnot. I just...I don't like things like that. Especially since I have plenty of geek gamer friends and they are not at all like the stereotype portrayed here. It bugs me. When you use a lot of all x's are y I don't like it. And that was this book. All guys are terrible, all geeks are scrawny dudes who will stare at your boobs, all x's are y. No.

Also a quick note - the girl says she is from Anza, CA whose only claim to fame is the PCT practically runs right through the town. I hiked the PCT with my husband and I read that and thought where in the world is Anza? I didn't remember it at all. So even though the trail does go by there (I looked it up and thought oh! It is by that one place. Okay), it is not someplace anyone ever talked about. At least when we were hiking. Strange. Then at the end Adam is trying to win Mia over and said he is going to do a "segment" of the PCT. How you could do the whole trail as a thru hiker, or parts as a "segment-hiker." He even had a book called the Segment Hikers Guide to the Pacific Crest Trail (which doesn't exist to the best of my knowledge). The author included a lot of nods to geek things, like Doctor Who and such which are real things, seemed accurate when she described them, but the PCT stuff? Not really. It is a little thing, but you wouldn't be a "segment-hiker." You would be a section hiker. You would hike a section. That is the vernacular in the hiking community. So at the end when she kept calling it a segment instead of section I kept cringing. You can have a section-hikers guide, be a section hiker, hike a section, not a segment. Sure you can use segment, but it is not what it is called in the hiking community. Plus why not include the name of an actual guidebook? If you are including so many other things, all of which are real, why make up stuff just for the PCT information? It bugged me. I am sure most people don't care or wouldn't know otherwise, but as I said I have hiked the trail. Just a bit more research and you could get it right. I have just never heard anyone refer to a section hike as a segment hike. It was something small, not a big deal in the story, but bugged me whenever it came up.

Overall this was an okay story. I didn't like all the generalizations, the wrong hiking terms being used, and Mia was just okay for me. I am on the fence whether I will read more or not. I may skip ahead and read about one of the other characters instead. We shall see. I didn't hate it, but I didn't love this story either.