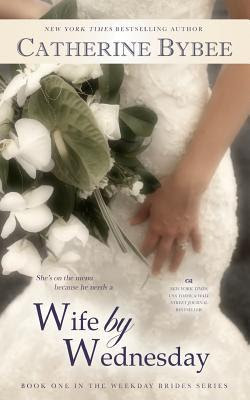 Blake Harrison:
Rich, titled, and charming…and in need of a wife by Wednesday. Blake turns to Sam Elliot, who isn’t the businessman he expected. Instead, Blake is faced with Samantha Elliot, beautiful and feisty with a voice men call 1-900 numbers to hear.

Samantha Elliot:
Owner of matchmaking firm Alliance and not on the marital menu…that is, until Blake offers her ten million dollars for a one-year contract. And there’s nothing indecent about this proposal. The money will really help with her family’s medical bills. All Samantha will need to do is keep her attraction to her new husband to herself and avoid his bed.

But Blake’s toe-curling kisses and sexy charm prove too difficult for Sam to resist. It was a marriage contract that planned for everything…except falling in love.

Wife By Wednesday was a surprisingly good read. I was expecting the cheesy, light read, which it is, but it is also so much more than that. It was a wonderful story and my first book by this author, but it won't be my last.

Blake needs a wife by Wednesday. If he doesn't get married soon he will loose his inheritance and he can't have that. He won't let his horrible cousin get anything and let him kick his mom and sister out of their house. It should all rightfully be his, but his father was not the kindest of men and even from the grave is trying to control Blake. So he needs a wife. Someone who will stay married for a year, act for the cameras and spies from his father's law firm, and he doesn't care about emotional attachments. So he signs up for a matchmaking service who will find him someone in the allotted time.

Sam is the owner of the matchmaking service Blake signs up with. She always goes by Sam since she knows a lot of men wouldn't meet with her if they knew she was a woman. She has had a rough go of it. She grew up in the lap of luxury until it was all taken away from her and her family. It was not good and the repercussions keep her from really trusting any men. I would have a hard time with that as well if I were her, especially after everything she went through. When she meets up with Blake she is ready to set him up with one of the women who use her service. Only Blake has other ideas. From the first moments he wants Sam and only Sam. She never thought she would be in this position, but the money would really help. She could do so much if she didn't have to worry about bills and such so of course she agrees to his terms.

These two were really fun together. They don't want to be attracted to each other, but they are. They get married right away and it is only afterwards that they start to really get to know each other. Blake leaves fairly quickly for business in Europe and they have to keep up the pretenses that they are married. They call and chat and quickly start liking each other, but there is still that one year deadline looming. Sam especially has a hard time with that once she starts falling for Blake. She knows he doesn't want more, but she can't help it. Especially when he is so sweet.

Now there are some bumps in the road of course. Blake's dad won't be won over that easily, even from the grave. Now here is where the book really shined for me. Where it turned into a story that was much better than I was expecting. One of the plot points is something that I normally hate. Something that I normally roll my eyes at and and think why did you have to do this?? But in this situation it felt organic. It worked. I loved it. This author turned a plot point I can't stand into something really sweet and fun. It was awesome.

Overall this is a great read. Blake and Sam are so sweet (and hot!) together. I can't wait to read more from this author.