Crow (Boston Underworld #1) by A. Zavarelli 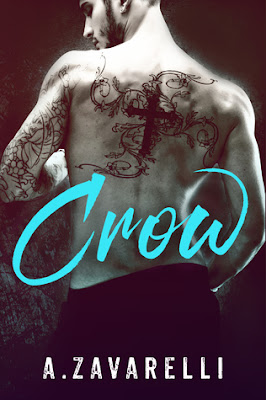 He’s a killer. A mobster.

The last man on earth I’d ever want to be with. I won’t lose my head just because he’s hot, Irish, and has a wicked accent to boot.

He’s one of the only leads in my best friend’s disappearance, and I don’t trust him.
So I’ve got a few rules in mind when it comes to dealing with Lachlan Crow.

1. Keep a clear head and don’t get distracted.
2. Do what’s necessary and never forget why you’re there.
3. Never, and I mean never, fall for him.

Throw out the book altogether. Because the rules don’t apply when it comes to the Irish mafia.

It was only supposed to be temporary, but now Lachlan thinks he owns me. He says he’s not letting me go.

And I believe him.

But if it’s my attention she wants, she has it.

The Russians want her dead, and now it’s up to me to look out for her. This girl is trouble. A distraction I can’t afford.

So why have I already decided she’s mine?

I’ve claimed her and there’s no going back now.

This is a full-length standalone novel full of hot Irish guys with accents. Steamy and dark mafia themes throughout. HEA included.

I enjoyed Crow much more than I thought I would. Even though I haven't read many Mafia/Mob stories I always think eh when I see them. Why? It is just not something I am really interested in. This is the second mafia book I have read and really enjoyed so maybe I should broaden my horizons more. We shall see.

Crow is the story of Mack and Lachlan. Mack who thinks she's this tough, street smart kid who knows everything and Lachlan who is high up in the Irish Mafia. Lachlan who is her way in to try and find her missing friend. Oh Mack. She came across as so incredibly young and naive. Like she hadn't lived on the streets for a few years. Like she didn't know how things worked. She has this plan to infiltrate the mob and find out what happened to her friend, but the way she goes about it is so incredibly stupid.  She thinks Lachlan got to be where he is by fawning all over some tits and ass. Like she just has to shake her stuff and he will let her do whatever she wants. It seemed incredibly naive. Like they are not just going to let anyone in. I am sure Lachlan could hook up with whoever he wanted so why would  he just go stupid over you? I cannot imagine that is how the high ups in the mafia world got to where they are. Lucky for Mack there are other things in play, namely Lach has to handle her for now, because without that? I think she would be up the creek without a paddle. Her "plan" was so naive and so laughably bad I thought without the addition of the Russians wanting her and Lach having to watch her storyline she would have been dead. It was all really stupid and in direct contrast to how her character thinks of herself. I can't imagine how she has survived as long as she has. She says what she wants and has no filter. She just tells Lachlan early on she knows exactly who he is and all his business which....really doesn't seem smart. I know she wants to find her friend, but you are supposed to be tougher than this. You are supposed to be smarter than you are. Have the streets taught you nothing? She just comes off as a naive little girl playing at things that she knows nothing about.

Luckily I still liked Mack. The way she was written, while it could have been really annoying, was alright to read. Yes, she is stupid at times, but it was okay. As the story progresses we keep getting scenes where she realizes she is not as tough as she thought. How her pride always told her one thing, she was too proud to need anything or anyone, when really she is not cut out for this. She does need other people. Without those scenes maybe I wouldn't have enjoyed it as much, but at least at times she realizes that she is in a bit over her head.

Now Lachlan was awesome. I loved him. He is very cold and doesn't trust easily, but there is just something about Mack. He has never wanted to settle down with one woman or anything like that, never wanted kids and such, but Mack slowly worms her way into his heart. I loved him. I loved seeing how possessive he was over her and watching him try and deal with her childish ideas. He was awesome. You can see how much he cares even if he doesn't want to. Of course both of them have secrets, things that will hurt the other when they find out, but they were cute together.

There is a lot going on in this story. The Mafia world is not very stable at the moment, there are some moles in the mix, and a lot of violence as a result, but I really enjoyed the story. I think Lachlan was what really sold it to me. He is the kind of guy I love reading. The last parts were a bit heartbreaking at times, but oh these two. So this was a really good read. I enjoyed the story even if Mack was a naive little girl. Lachlan made up for it.