How to Save a Life by Emma Scott 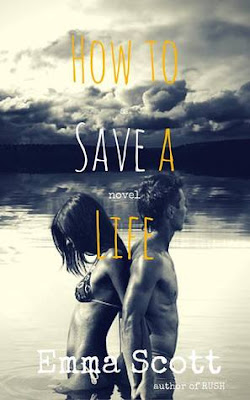 Josephine Clark is trapped. A harrowing past haunts her every time she looks in the mirror, and she can’t escape the violence of her everyday life. More and more, her thoughts turn to Evan Salinger, the boy she knew in high school. The boy they called a mental case. A loner. A freak. The boy who seemed to know things no one could know. For a few short weeks, Jo had found perfect solace in Evan’s company, sneaking every night to meet him at the local pool. In the cool of the water and the warmth of Evan’s arms around her, Jo had tasted something close to happiness.

Cruel circumstances tore them apart, and four years later, the sweet memory of their time together is dissolving under the punishing reality of Jo’s life now. Evan seems like a fading dream…until he reappears at the moment she needs him most. Guided by Evan’s strange intuition, they flee her small Louisiana town, and Jo begins to suspect there is something more to his sudden return than he admits.

Over twelve days across America’s heartland, deep secrets come to light, buried pasts are unearthed, and the line between dreams and reality is blurred as Evan and Jo fight to hold on to their soul-deep love, and discover that there is more than one way to save a life.

How to Save a Life is a complete second-chance STANDALONE novel with shades of the paranormal. It carries the characters from high school through to their early twenties. It is not YA; mature subject matter, and sexual situations. TRIGGER WARNING: domestic violence (on the page) and mention of sexual abuse (off the page) For readers 18 years and up.

How To Save a Life was an interesting read for me. I didn't really like the way it was written, but the story was interesting enough to keep me wanting more. I wanted to find out what was going on. Without the mystery of Evan and what happens to tear them apart I probably would have stopped reading after the first chapter or two. Jo was just okay for me. I never really got that she had horrible things happen to her. I know, I know, I was told what happened, but I never really believed it with her. And yet I still really enjoyed this story. Which is odd. Normally if the writing is off like that then the story is just eh for me, but instead I found myself at the end wanting more. So the story really carried the so so writing for me.

Jo has been moving around every few months with her mothers cousin. The rest of her family is not around after some bad things came to light and she doesn't really have anyone. Sure her mothers cousin is there, but he is a long distance trucker and gone most of the time. They don't have that close relationship, and for the most part she is okay with that. She moves from school to school and always tries to set up herself as the school slut. She has a scar on her face that she tries to keep hidden and she knows the kids will talk so why not make it what she wants them to talk about? If she is a slut then maybe she won't be the weird girl with the scar. She wears her otherness like a badge. She dresses the part of the freak as she feels like it makes it easier. She will just accept it and be in control that way. Then at least when people say stuff about her it is true.

Evan is the current school freak. The outcast. The one no one will talk to and everyone picks on. Jo first hears of him from the gossip around school, but when she sees him she is confused. He doesn't look like a freak. He doesn't dress in black and whatnot. He actually is quite good looking and if she didn't know any better she would have assumed he would sit with the popular kids at lunch. Hang out with them. She is so confused as to why he is okay looking normal and wearing whatever he wants. This is part of the Jo just being eh for me thing. Like I don't understand her judgements of people based on what they look like and what not. Like if other kids make fun of you that means you should automatically look like you don't fit in? I didn't get it.

Evan and Jo both don't fit in, but when Jo is around Evan she feels safe. It is nice. And when they find themselves both at the swimming pool late at night they start to get closer. It was sweet and I loved how Jo wasn't afraid to be seen with him in school. How she didn't care what people would say. She liked him so that was that.

The first chunk of this book is them getting to know each other. I kept waiting and waiting to see what would happen to tear them apart and man. It was ridiculous! Evan's adopted family is not the best, his "brothers" pretty terrible to him, and it is not good. Evan gets it, he understands why they pick on him, but sometimes he has to say enough is enough. I really liked him. He has some strange stuff going on, things he tries to hide from most people (except Jo), and he was really sweet and wonderful. He really made the book for me.

So things happen, Jo and Evan were planning on running away together, but those plans get thrown off track. It is not good, especially for Jo. Good thing Evan knows when she needs him and I loved how they came back together. Still I kept thinking how in the world will these two make it? How will they get out of this situation they find themselves in? It definitely didn't play out the way I expected it and it was a lot of fun. An interesting storyline and I am curious to read more by this author.