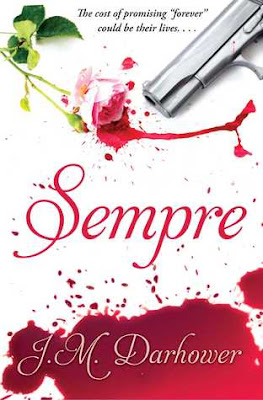 Haven Antonelli and Carmine DeMarco grew up under vastly different circumstances. Haven, a second-generation slave, was isolated in the middle of the desert, her days full of hard work and terrifying abuse. Carmine, born into a wealthy Mafia family, lived a life of privilege and excess. Now, a twist of fate causes their worlds to collide. Entangled in a web of secrets and lies, they learn that while different on the surface, they have more in common than anyone would think. In a world full of chaos, where money and power rule, Haven and Carmine yearn to break free, but a string of events that began before either of them were born threatens to destroy them instead.

Murder and betrayal are a way of life, and nothing comes without a price-especially not freedom. But how much will they have to sacrifice? Can they escape their pasts? And, most of all, what does it mean to be free?

Sempre was a strangely good read for me. I read it over about a week which is not how I normally read books. I usually finish a book in a day, two tops. I had a friend visiting so I only had an hour or so to read every day so I had to just keep picking it back up and re-immersing myself into the story. That is where the strangely good came in. I was loving the story, loving getting to know both Carmine and Haven, loving everything, but every time I picked the book back up and started reading I would think "wait a minute. Why am I loving this so much? The writing is just so so and not really my thing..." but I would continue reading and quickly was back in the story and had forgot about the writing. Odd. I don't think I would have even noticed anything had I read it straight through like I normally do. So even though I kept thinking the writing is only so so when starting to read, by a couple paragraphs in I was back in the story and back to loving it. I can't wait to read the next book now and see the next chapter of their lives!

Sempre is the story of Haven and Carmine. Haven has not had a good life when this story opens. Really she has one of the worst situations I have read for a book character. Her father is incredibly abusive, somehow related to a mob family, her mother is abused as well so she can't help, she fears for her life daily and is basically a slave. For as long as she can remember she has been told that is what she is and she is not like everyone else. She is not good enough to be out in the world. She is not supposed to know how to read or write, she didn't really have any education except about house chores, she has a miserable existence. And yet she is such a kind sole.

Haven is this amazing person and it is not until Carmine's father saves her that she can really let herself become who she is. It doesn't happen overnight, and it is not easy to undo all the harm she suffered growing up, but she is starting to find a place that she can feel safe. True she doesn't completely trust Carmine's father, especially after a few bad incidents, but it is much better than where she was. At the beginning she still can't go outside, she is trapped in the house, but at least no one is beating her or threatening her life daily. If she makes a mistake here she is not punished. Oh I loved reading her story. I loved seeing her come out of her shell and be who she really is. She was great.

Carmine hasn't really been good since his mom died. He was there when it happened and he hold so much guilt and anger in that he is not in a good way. He sleeps around, has never had a girlfriend, just drinks and does drugs and generally messes up on a daily basis. He can't keep his anger in check, but getting to know Haven changes him. She makes him want to be a better person. She makes him want to be good enough for her. I loved him. He was hurting so much, but he is this amazing person who is there for Haven whenever she needs him. He is a fighter and he will definitely fight for her. It was like when they were thrown together there wasn't any other option. They were it for each other.

Not that it is easy. It takes them a while to even be comfortable in the same room together. Haven especially is skittish since she is just a slave. She is not good enough for someone like Carmine. She never will be...and Carmine is terrified of letting someone else get close. Everything he has ever loved has been taken from him and he doesn't want it to happen again. Oh it was heartbreaking at times, but these two are so sweet together.

The story is a longer one, not that I am complaining. You get to see a lot of Carmine and Haven. You get to see them fall in love and deal with some of the complications that entails. See them deal with some new information, see them try and work with the mob family aspect, see them just create this very solid foundation. Through all the ups and downs they are there for each other. While this book doesn't end on a cliffhanger it does end on a bit of an open ending so I am eager to read the next chapter of their story.