Following Me by K.A. Linde 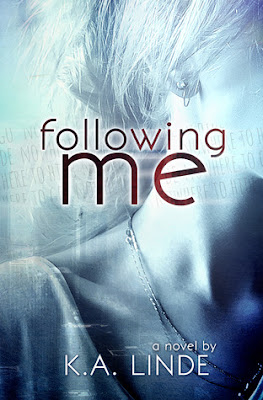 
“I knew you were running the first time I saw you…"

Devon didn’t have a game plan when she decided to leave St. Louis on a Chicago-bound train for the summer. Just a reason.

One she couldn’t share with anyone. Not Hadley, her best friend from college, who lets her stay in the guest bedroom; no questions asked. Or Brennan, the bartender at the local restaurant they frequent, who she actively tries to avoid. Or Garrett, Hadley’s boyfriend, who befriends her when she has no one else to turn to.

"I just didn’t know what you were running from...."

Desperate to hide at all costs, Devon plunges into her new life in the city. Everyone around her starts to reveal sides of themselves Devon never expected. And just when she starts to get comfortable, her world flips upside down…

"...but I think all along you were running toward me."

Following Me was an odd read for me. I kept waiting for it to turn into a really preachy Christian book which was odd. Then the main character did not make much sense to me. She didn't seem realistic, and that just made the whole book not so good.

Devon runs away from St Louis for the summer. Something happened, but she can't talk about it with anyone. She tells her family she is staying in St Louis with her boyfriend, and told her boyfriend she was in Paris with her family. Instead she runs to Chicago to her best friend from college and yeah. It might have helped some if whatever happened was revealed earlier in the story. At least then I would be able to see why she might not want to go back, why she might want to keep it secret, whatever. Instead we see this perfect sounding boyfriend, these friends who are fine, and Devon who always compares herself to others and finds herself lacking. She was annoying to read. Like she finds out some secrets her friend Hadley has, and once she does she realizes Hadley is not as perfect as she thought she thinks what does that say about me? And I just was like nothing? It says nothing about you...she was odd. When we first meet Hadley she says that Hadley graduates, got a good job and moved to Chicago, something Devon would never have considered doing. Um what? You never considered getting a job after college? Or potentially moving if said job is somewhere else? What did you think would happen? You would be homeless on the streets of St Louis? Hadley didn't do anything crazy....

I think one of the biggest issues I had with Devon is that she seemed like a super sheltered, no real life experience, country bumpkin. Like someone who grew up on a farm in a tiny town and never went anywhere else. Instead she grew up in Nashville, goes to college in St Louis, and her parents are famous in the country music industry. It even mentions taking trips to New York City and stuff when she was growing up. I mean she told her boyfriend she was going to Paris for the summer and that was totally believable to him. There is no way she is this naive, unworldly, never experienced anything, never been in a big city girl. It just didn't make sense!

Really a lot of things didn't make sense, or the author would use things in not the correct context. Like Devon can't tell Hadley what happened, what the horrible thing is that she ran away from, because Hadley would "have a field day" and she didn't want to deal with Hadley freaking out and getting so angry. That is not having a field day...

She also would say her views on things in odd ways that made me scratch my head. Like how the music industry is the worst, it will suck you in even if you are on the outskirts. I mean she even smoked pot in high school! Shock horror! Okay I know some people are really against pot smoking, but I don't really know why. I have known plenty of people who did and still do on occasion smoke pot and they are fine upstanding citizens. They have good jobs and families and are just normal people. It is not like a hardcore drug that destroys you. Like those photos of people who have been using Meth and stuff. So it got all drugs are bad! Don't do drugs! psa there for a while. Then she goes on about sex/masturbation, how she can't do anything herself as it is wrong and stuff. This came quickly after the drugs are bad so I was waiting for it to turn into Jesus is the best! Praise Jesus. Or maybe how gay people are "wrong" or something. It just...it read strangely to me.

Through the whole book Devon has this poor me attitude. She is attracted to Brennan, but tries to stay away as she still has a boyfriend. She loves Hadley's boyfriend Garrett as he is oh so perfect, and makes some poor decisions there. For some reason she finds it okay to spend lots of alone time with him and almost sleep with him on multiple occasions. It is obvious he is liking her, but she doesn't see anything wrong with maybe sleeping with her bff's boyfriend (until *spoiler alert* he did finally make a move and kiss her and she pushes him away after a few minutes). Yey her! All while she is crushing on Brennan the whole time, but won't do anything about that. Yeah. She just keeps saying how perfect Garrett is, how he is the one person she can talk to, yada yada yada. I didn't understand.

So then everything goes downhill when Devon's boyfriend comes back. The boyfriend that Garrett told Devon she had broken up with when she left for the summer. How that makes sense I have no idea. Just another head scratcher moment. She left with the boyfriend thinking she is coming back. That is not breaking up. I could see maybe if she snuck off in the middle of the night without him knowing then sure. So Garrett tells her she broke up with her boyfriend because she left him for the summer, when that makes no sense, so then she tells Brennan that she broke up with her boyfriend. So then they get together when in reality she didn't break up with her boyfriend and is just cheating on him. Wonderful. I know the boyfriend is not good, but come on! It was odd. Really this whole book is odd. The ending didn't make a lot of sense, what people did was so not cool, and I just was over it pretty early on. I just didn't care for Devon much and the writing didn't help that. I kept being confused why someone would say or so something in the way they did. Not the book for me.