Review: Something About You (Saint and Lucky #1) by Riley Hart 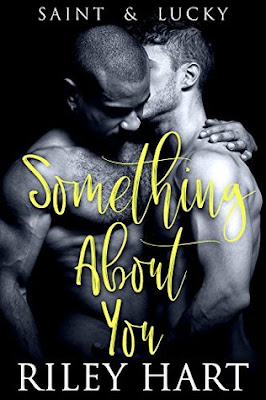 Lucky Tyler Holloway has never felt particularly lucky. Frankly, he's as regular as can be. He works construction with his brothers, loves his small-town life, and shares a close bond with his family, especially his grandmother. Okay, so maybe he has a few secrets in his closet, like his bisexuality…and that other thing he doesn’t talk about…

Grayson ‘Saint’ St. Claire has it all: a dream job in LA, money, freedom. Saint doesn’t do attachments, which is just the way he likes it. Still, he’d be lying if he didn’t admit he missed his deceased parents, the only family he had... Until he gets an email from some guy named Tyler, revealing the existence of a grandmother he’s never met, prompting Saint to drop everything and drive across the country.

Saint and Tyler couldn't be more different. Tyler dislikes Saint on sight, but there's something about Tyler that gets under Saint's skin. It’s not until they get to know one another that everything begins to change for the better. But the Holloways and St. Claires have secrets, their pasts tied together in tragic ways. With the odds stacked against them, Saint and Tyler have to face the fact that love alone might not be enough…

Something About You was such a sweet read. Lucky and Saint were wonderful together and I loved watching this story play out.

Lucky is the town golden boy. The guy who everyone loves and is nice to everyone. The one who will help anyone who needs it without a second thought. He is always trying to fix things for others and is fairly happy living his life. Yes, he has some secrets and some things he has never explored, but would like to. Maybe. One day. But he is happy. He has his bff and his family and life is good.

Saint likes to live his life to the fullest. He has fun, sleeps with lots of people, works hard, everything is great. He loves his life in LA. Sure he doesn't have any one person to spend his life with, but he doesn't want that. He is perfectly happy hooking up with people when he feels like it. Why not? As long as it is between consenting adults who cares?

These two were amazing together. Saint thought he was alone in the world family wise until Lucky writes him out of the blue and lets him know he still has a grandmother. A grandmother who is Lucky's grandmothers bff. A grandmother who Lucky was trying to help reunite with her grandson. Saint couldn't believe it, his father never told him he had family, but he can't just not do anything.

It was great as when Saint showed up in town and he and Lucky did not hit it off right away. They both seem to say things in the worst of ways and Lucky for sure didn't like him. Or maybe was trying not to like him as he had never been with a man before and was a bit afraid of his attraction to Saint.

These two worked so well together. Once they got all of their misunderstandings and unfair first impressions out of the way they were wonderful. I loved how confident Saint was and how much he helped Lucky open up and be who he is. Lucky has some pretty closed off ways of thinking about how men and women should be and is hesitant to even mention some of the things he fantasizes about because that is not what men want. Right? Only Saint gives him that safe, secure place to experiment and see what happens. Saint never wanted a relationship and Lucky only ever had relationships, but was willing to give a no strings things a try with Saint. Of course these two can't keep it easy breezy and start falling for each other. It was so cute and such a good read. I am happy that there is a second book as I wasn't quite ready to say goodbye to these characters.