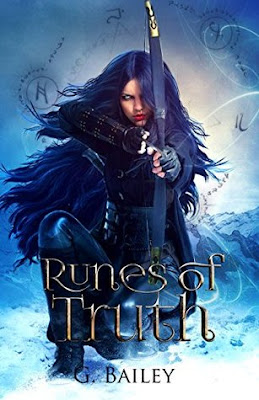 Thief. Runaway. Assassin. What happens when your rumoured name destroys your life? When the very runes engraved on your skin since birth, are a death sentence?

When a royal family she didn't know anything about go missing, Evie finds herself thrown into the royal court of the protectors, and they demand her help.

Help in exchange for a chance at freedom and the name that's haunted her, forgotten. A name she can’t even read, a name she doesn’t understand.

But when three Royal protectors are tasked with helping her, her demon ex who is literally from hell, stalking her...will Evie ever be free?

Runes of Truth started out really good, but quickly went downhill for me. From the beginning I was curious about what was going on with Evi, why people want to kill her, who her parents are, what is going on. You jump right into the action and learn about the world along the way which I enjoyed.

Only Evie quickly gets captured and taken to the royal family for the Protectors and has to help them with a mission. She needs more people to come along with her where she is going so they send three protectors with her. Plus her ex-boyfriend who wants to get back together with her. And then things got really meh at best. There was all of this trying to be like she was into all the guys, but it didn't work as there was no development there. None. Like she thought everyone was hot when she met them and that somehow was supposed to translate to she cares about all of them (and them her) in two seconds. Okay...and her ex really didn't make any sense. He was all SHE IS MINE!!!! whenever the Protectors looks at her, but then after like two pages he is oh, I think you should be with all of us cause they bring out a different side of you I have never seen before. Okay...that would be great if there were any reason why he suddenly switched his mind or if we saw her come out of her shell and be different with the other guys or really if there was any character development at all. This wasn't a long read, it really could have used more time to develop the story as it felt super rushed and you were just supposed to go along with everything even though you never saw any of it happen. It was way too quick, way too simple, and not very good in the end. Oh well, it didn't take that long to read.