Review: Beard with Me (Winston Brothers #6) by Penny Reid 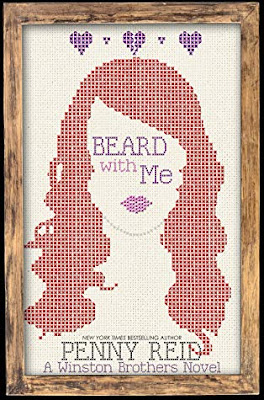 No one is better at surviving than Scarlet St. Claire and making the best out of circumstances beyond her control is Scarlet’s specialty. In an apocalyptic situation, she’d be the last person on earth, hermitting like a pro, singing along to her CD Walkman, and dancing like no one is watching.

No one is better at fighting than Billy Winston and raging against his circumstances—because nothing is beyond his control—is Billy’s specialty. In an apocalyptic situation, he’d be the first person on earth to lead others to safety, overcome catastrophe, or die trying.

Billy is fearless, Billy is disciplined, and Billy is honorable . . . except when it comes to Scarlet St. Claire.

‘Beard With Me’ is the origin story of Billy Winston and Scarlet St. Claire (aka Claire McClure) and is just the beginning of their epic love story.

I was so ready to read the beginning of Claire and Billy. To see what happened all those years ago. Why they are apart now. Plus see the rest of the Winston's as their younger selves. I was a little nervous going in as I knew it was going to be something big. Something terrible had to have happened to keep these two apart for so long. Something devastating. I couldn't wait to find out, but also was already hurting for them before I even started reading.

Only...the big devastating thing? I was reading and I got to one point and I said no. No no no no no. Not that. I was still hopeful it wouldn't be what I thought it would be, but unfortunately, I was right. And...it was...they have not been together for 20 years because of that? That was it? I...it was so frustrating. I expected to get my heart crushed, but instead I was annoyed. Because there is not really a good reason for these two to not be together. Plus now I want to know what happened with Ben because Ben? Ben is the worst. Having read the other Winston Brothers books prior to this I always thought he was a good person, but he is not. Not really. He creeped me out hardcore in this book. Partly because he is 19 creeping on a 14 year old, and partly because he is not a good person even though everyone treats him as god's gift. Maybe that is why he turned out the way he did. Because everything has always been handed to him and everyone had always thought he was a good person so he feels a bit entitled and like he can do whatever he wants. No, I did not like him. Not at all. Which was really surprising.

I did enjoy seeing all the Winston's even if they didn't really feel like their age most of the time. I had to keep reminding myself that these people were in high school or younger as they all seemed a lot older. I know some of them have life experiences that make them feel older, but still. It didn't work for me. I think the only one who kind of felt their age was Roscoe. I did enjoy seeing Billy and Scarlet fall for each other. Scarlet does not have an easy life, but she makes the most of it. And Billy is an upstanding guy. Always there for the people he cares about and he will do what he has to to keep them safe. He has way too many responsibilities and has had them for way too long, but it is what it is. I got to the end of the book and still am eagerly anticipating the completion of their story even if I find the reason why they are in the situation they are in to be meh. Billy and Claire are still amazing together so we shall see where it goes.

This was a hard one to rate as I didn't hate it, enjoyed some parts, some moments were so beautiful and made me feel all the feels, but then there were the parts that annoyed me and made me angry. But after sitting with it for a bit it was more on the not so good side than good. So I will go with that. Even though there were parts that I enjoyed the overall impression I am left with is not so good. Oh well.