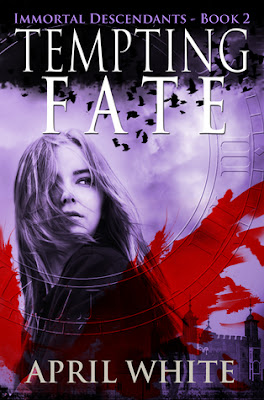 The time-traveler, the vampire, and the thief will need all of their skills and ingenuity as they race against time to steal a document that could change the course of history and put the Immortal Descendants at the mercy of the Mongers. Can they stop a madman bent on collecting the blood of history’s most powerful Seer before the executioner’s axe falls?

Tempting Fate is the second book in the Immortal Descendents series and I really enjoyed this one. Oh, it was so much fun! Note: It is a continuation of the first book and not a standalone story.

Now I will say at first, the first 50 or 60 pages, Saira was super annoying. Whiny, acting out, stupid kid which I don't really like. I...she got on my nerves. Yes, I know her mother left her when she was twelve, but oh, she likes to be poor me and make small things into big deals. But then the story got more interesting and Saira started to be a bit better for me. There were still times when I was like honey, you need to grow up and stop acting out when people call you on something you do that is not particularly nice or kind to other. Or stop lashing out when someone tells you something that is true, but you just don't want to hear. For this I loved Elizabeth. She was such a force to be reckoned with! I almost wish we could have more Elizabeth in future books!

So in this chapter, we have Saira and Archer and Ringo trying to find the genealogy book and correct a wrinkle in time so that their present is not completely different than what it should be. And so that the future, or maybe now past, for lots of people wasn't incredibly bad. Normally I have an issue with time travel stories, the time travel doesn't make sense to me, but in this one I loved the way the author used it. How she explained what would happen if someone changed something small or something big in the past. Like if Elizabeth didn't end up becoming queen how that could have a major effect on the present. And how people can't be in the same time that they already exist. It was fun.

Now I read this after reading An Urchin of Means, after falling in love with Ringo and oh, my heart broke from him in this story. To have a vision of what might happen with him was so sad. And Saira not telling the truth or everything she know and just doing whatever she wanted didn't help. She definitelty was still a kid in this story, but by the end she does start to change. She starts to grow up and think of others. She starts to see that she hurts those who care about her and when she just runs off and does whatever it doesn't seem like she she cares for them. She started off super annoying, but by the end she had gotten better. More considerate of others feelings. More caring with those she cares about. For as much as she annoyed me in parts I loved seeing her grow and become a better person. I can't wait to see what the next chapter has in store for me.

Besides all of these characters you also have an awesome historical element to the story. With Saira being able to clock back in time you get to see the past like I haven't read before. I wasn't super interested in Elizabeth and her plight, but once they got back to help her it was fascinating. The author makes the history so much fun that the characters are involved with. I can't wait to see medieval France through the eyes of these characters! And see who we will meet along the way.