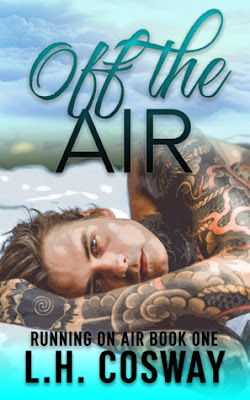 Spending a month filming a reality TV show with your ex is no picnic.

Especially when you’ve signed a contract stating that the two of you will not, under any circumstances, have romantic relations while filming.

Leanne Simmons and Callum Davidson never had an easy relationship. From enemies to lovers and back to enemies, they’ve been on again/off again for years. Things come to a head when Callum gets into an altercation with a rival for Leanne’s affections. Their management decide enough is enough and give them both an ultimatum: sign the contract or leave the show.

Unwilling to give up their livelihoods, Callum and Leanne sign on the dotted line. However, like always, they can’t resist making a bet. Callum thinks it’s only a matter of time before they break the agreement, while Leanne is determined to see it through.

Can she resist him for an entire month without losing her sanity? And what if this is the one bet that finally breaks them both?

Off the Air is a contemporary romance and Book One in L.H. Cosway’s brand new “Running on Air” Series. Each book focuses on a different couple and can be read as a standalone.

Off the Air was a great start to this new series. I love the whole freerunning/parkour world that is created and all the super cool things the characters do for their show. I would never be able to pull off the stunts they do, but I would love to watch!

Leanne and Cal are costars on their freerunning show, but they also have a romantic past. If you haven't read it already you can see how they met in the novella Air Kiss (currently free on Amazon.com). Cal was pretty much in love with Leanna as soon as he saw her, but he didn't want to be. He didn't want to be attracted to her and have everything happen that did. She is his heart, but it is not easy. In the past he has had real jealousy and anger issues, but he is trying to do better now. Trying to be the person Leanne deserves so maybe he can finally have her for keeps. They might finally be able to figure this out so they are both happy.

Leanne has issues letting people in. Especially Cal. Because of what happened. She hasn't dealt with her past, she keeps pushing it aside and thinking if she keeps running it will disappear. But that doesn't happen. Instead it is always there, she is drinking way too much to try and stop thinking. She needs some help because she is on a real destructive path. Plus she always thinks the worst of Cal even when he is being genuinely nice and sweet. I can't say Leanne was my favorite because she was frustrating to read. She doesn't believe Cal, she puts him through the wringer and is kind of terrible to him. I know they said about their volatile past, but not seeing how Cal could be just as horrible made me not like Leanne as much. She has so many walls up trying not to get hurt, but she still is. I just wanted her to figure it out and find a way to move on and let people in. To let others love her and love in return. She was frustrating to read, but I still enjoyed reading her story.

Overall this was a great read. Leanne and Cal have plenty of issues to work on and I loved seeing them try to figure everything out.