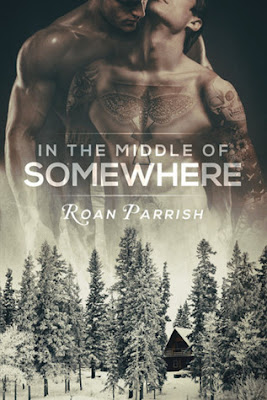 Daniel Mulligan is tough, snarky, and tattooed, hiding his self-consciousness behind sarcasm. Daniel has never fit in—not at home in Philadelphia with his auto mechanic father and brothers, and not at school where his Ivy League classmates looked down on him. Now, Daniel’s relieved to have a job at a small college in Holiday, Northern Michigan, but he’s a city boy through and through, and it’s clear that this small town is one more place he won’t fit in.

Rex Vale clings to routine to keep loneliness at bay: honing his muscular body, perfecting his recipes, and making custom furniture. Rex has lived in Holiday for years, but his shyness and imposing size have kept him from connecting with people.

When the two men meet, their chemistry is explosive, but Rex fears Daniel will be another in a long line of people to leave him, and Daniel has learned that letting anyone in can be a fatal weakness. Just as they begin to break down the walls keeping them apart, Daniel is called home to Philadelphia, where he discovers a secret that changes the way he understands everything.

Roan Parrish is quickly becoming one of my new favorite authors. Everything I have read from her is amazing and I love every second of it! Oh, Daniel and Rex were so cute together!!

Daniel is a guy who has never fit in. He only has one person he is close with, his friend who took him in when he was younger and angry. Who helps keep him sane especially since his family is not so good. His brothers are not the nicest, his dad doesn't really understand him, he is almost a loner. So he doesn't really let people in. Or hasn't. He has never dated anyone, not really, never been in a relationship, is just getting through life. He has gone to school and is looking to be an English professor at a college, though he thought he would be able to find one in Philly where he has always lived. Only he doesn't. He finds one in a small town in Michigan and while he is a city boy, he knows this can be a stepping stone to a better job in a bigger city.

Rex is so freaking adorable I can't stand him! He is my favorite kind of guy - the big, tough, strong marshmallow. He was so cute. I loved him so so much. And him with Daniel? Amazing. Rex is shy and quiet and doesn't really have a lot of friends. He has lived in the small town awhile, but because he is big and quiet people don't really get to know him. Which is a shame because he is one of the best people ever. If you are friends with him he would do anything for you.

These two meet under some awkward circumstances, but there is that attraction instantly. Though they both have some things in their past that make them a bit unsure. Daniel is not really used to good things, which Rex is definitely a good thing. He always expects good things to be taken away so he doesn't really know how to trust that Rex will be there. Plus he doesn't know how to do a relationship or dating or letting people in or any of that. He was so sweet trying to be the best for Rex. I loved these two! They were perfect together. Rex likes to take care of people, help people, and that does cause some issues at first since Daniel is not used to it. Daniel wants to be thought of as strong and capable and he thinks letting people help you makes you weak. Good thing he does have a best friend to make him see how Rex wanting to take care of him is a sign that he cares. That he likes Daniel and doesn't want anything to happen to him. Plus Rex can cook, which I loved, and Daniel definitely cannot. Oh it was hilarious trying to see Daniel make something. Especially bacon. I don't even eat bacon but even I know how you should cook it. It was fun.

These two were so sweet together. I loved strong silent Rex with self-conscious babbling Daniel. The story was so sweet and I loved every minute of it. I loved how they met, their awkward beginnings, their arguments and make ups, how they grow stronger together. I loved this story and can't wait to read more, though book two is Daniel's awful brother and I may need to wait a bit to read that one. I am sure I will love it, but I am not sure I can read him right now after the high of Daniel and Rex. Because Daniel's brother, even though I can understand why he did some of the things he did, I don't like. So we shall see if the author can make me love him as much as I have loved every other character I have read.