Review: A Head Full of Ghosts by Paul Tremblay 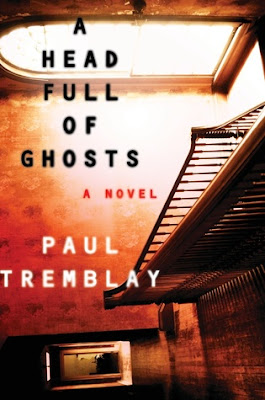 The lives of the Barretts, a normal suburban New England family, are torn apart when fourteen-year-old Marjorie begins to display signs of acute schizophrenia.

To her parents' despair, the doctors are unable to stop Marjorie's descent into madness. As their stable home devolves into a house of horrors, they reluctantly turn to a local Catholic priest for help. Father Wanderly suggests an exorcism; he believes the vulnerable teenager is the victim of demonic possession. He also contacts a production company that is eager to document the Barretts' plight. With John, Marjorie's father, out of work for more than a year and the medical bills looming, the family agrees to be filmed, and soon find themselves the unwitting stars of The Possession, a hit reality television show. When events in the Barrett household explode in tragedy, the show and the shocking incidents it captures become the stuff of urban legend.

Fifteen years later, a bestselling writer interviews Marjorie's younger sister, Merry. As she recalls those long ago events that took place when she was just eight years old, long-buried secrets and painful memories that clash with what was broadcast on television begin to surface--and a mind-bending tale of psychological horror is unleashed, raising vexing questions about memory and reality, science and religion, and the very nature of evil.

After reading and loving Cabin at the End of the World I immediately looked up the author to see what else he has written. I was surprised to see that he had written another book I tried to read but put down after a chapter or two because I couldn't get into it. It was written in the same style as Cabin at the End of the World, but for some reason in that book I didn't mind it. I also saw he had this story, one which I did look at before but was just meh on. I mean I am not into ghosts or possessions or anything like that. Not a fan of the Exorcist or any of those horror movies involving the church and someone who is possessed so I wasn't going to read this. After loving the other book so much I decided to give it a try. Why not? I may love it too.

And I did. I loved this story so much! It was not what I was expecting and man some of the scenes were super creepy. I would say overall it is slow and not much happens, but it worked. It was awesome.

Now the one thing I didn't absolutely love at first is that the story is set up a bit...strange. There are a few different settings and chapters and one at first was really jarring. There is the lady who is meeting with someone who is going to write a story about her and her family. About what happened when she was younger. Then we get the story from the point of view of that young girl, the kid, and everything that is going on. These were the best. I loved them. Because kids see things differently at times and what happens with her sister can be pretty creepy. It is a glimpse into mental illness and how the struggle to try and get help when you don't have the means. That poor family. But I loved seeing everything through Merry's eyes. How her sister is changing and not the same sister she used to have. How her parents signed up to be on this show documenting what is happening with her sister and her interactions with the people working on it. It would be so strange to have all of this chaos around and be so young.

Then we have the jarring one - the blogger writing about the show many years later. She is re-watching it and blogging her thoughts on everything. What they show, what might be set up and not real, everything. At first when I got to these chapters it took me out of the story and at times I was like no! Stop reading!! Spoilers!! which is odd. As it is part of the book. Part of the story. I wasn't reading something about the book and stumbling over things before I had read them, but it felt like I was. Which made the story more interesting. By the end I did enjoy these posts. It was interesting seeing what the blogger said about everything, then going back and seeing everything from 8 year old Merry's point of view.

I really loved this story. I never would have picked it up to read had I not read the other book first and loved it, but I am so glad I did. Now I think I will go back and try that other book again. Maybe I will enjoy it more now that I am more familiar with this author.