In the Heir (Westerly Billionaire #1) by Ruth Cardello 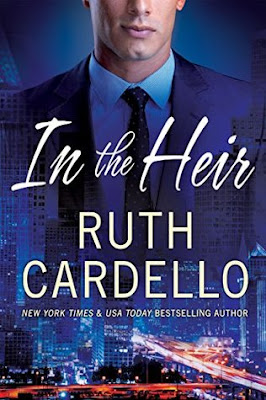 New York Times and USA Today bestselling author Ruth Cardello returns with an irresistible series about sexy billionaires and the strong-willed women who tame them.

Brett Westerly is his father’s golden child, but it’s come at a cost. As head of the family corporation, he throws himself into his work—hiding in his office is easier than confronting the reality of his broken family.

After a bitter divorce that split the family and divided loyalties, the wealthy Westerly matriarch offers an early inheritance to any grandchild who marries and invites the entire family to the wedding. Brett’s brother Spencer rashly gets engaged, and Brett knows it’s his duty to intervene. But he never imagined the unwelcome desire Spencer’s fiery fiancée would spark in him. Now the man who’s used to getting everything he could want has met the one woman he can’t have.

Ever since she was a girl, Alisha Coventry considered Spencer and his sister Rachelle the family she didn’t have. When Spencer asks for her help, Alisha has no problem becoming his fake fiancée—until she meets Spencer’s sexy older brother Brett. The chemistry between them is undeniable—forbidden—but as their relationship deepens, Brett is determined to have her.

Alisha only wanted to help the family make amends. Now she’s falling for the wrong Westerly.

Brett loves his brothers, but they don't seem to know that. He can come across as harsh and unfeeling, but he is really a big teddy bear. He really does whatever he can in the background to help them out. They just don't know it.

When Brett's grandmother decides that she will give her grandchildren their inheritance early if they get married, his brother Spencer gets engaged. To his childhood best friend. Brett doesn't know that the engagement is just for show, they are not really in love and Alisha is just trying to help out her friend who is like family to her. The only family she has. Why wouldn't she help him when he needs it after everything he and his family have done for her over the years?

When Brett starts looking into Alisha, trying to make sure she is not taking advantage of his brother, he never expected to start falling for her himself. Of course he would never act on it and hurt his brother, but it is not something he expected. And Alisha starts falling for him as well. She can see that though he may bark out things, his bark is worse than his bite. That he really cares for his siblings and is actually a really kind man. Not at all what Spencer had led her to believe.

These two start spending more time together, they have some ups and downs, and they have to try and figure out if they were to be together how to do so without upsetting everyone else. It was okay, but like I said I didn't really see the connection between the two of them, or anyone for that matter. Plus I didn't really understand some of the people's reactions to things that happened in the story. It made no sense! As a whole this story was alright and by the end I was happy. A light, quick read.