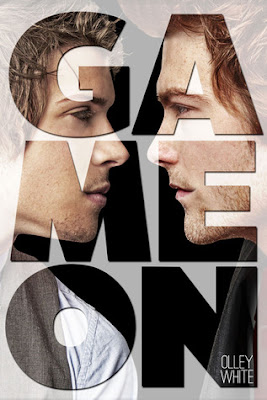 Dear Author,
We met in the strangest way.

I was convinced he was a girl because of his choice of character, and he thought the same thing about me. You can imagine how surprised we were when we first met in person. How confused I was about my feeling for him. I was already in love with the person behind the character, but I had never been attracted to a man before.

Can you tell the story of how we became that happy couple in the picture?

Photo Description:
Two men, in their early twenties, lean towards each other for a kiss. Both smiling, they have their eyes shut. One boy has tousled hair, an earring and an upper ear piercing. He’s wearing a bright turquoise T-shirt while the other has neater hair and is wearing a checked shirt. Their hands are held, and a gaming controller nestles between them. A computer screen with a game playing on it is visible in the background.

This story was written as a part of the M/M Romance Group's"Love’s Landscapes" event. Group members were asked to write a story prompt inspired by a photo of their choice. Authors of the group selected a photo and prompt that spoke to them and wrote a short story.

Game On was such a cute read. It is a quick read, but I loved it! Stefan and Max were so cute together!

Max and Stefan both play an online video game. They start chatting one day and keep chatting and growing closer even though they both think the other is a girl. Stefan feels like he is gaining a new best friend since he is gay, and Max is falling for Stefan he thinks is a girl based on his user name and avatar. When these two meet up and realize they are both guys they decide to make the best of it and hang out and be friends. Only Stefan is falling for Max and is seriously into him and he doesn't know if he can be just friends with him. Because he may like him too much,.

This was a cute read watching these two try and figure things out. Max starts falling for Stefan, but he has never been into a guy before so it is a bit weird for him. He doesn't really know what to do and it takes a minute to figure everything out. This was a quick read, but I really enjoyed it.