Icing on the Cake (Wild Wedding #2) by Ann Marie Walker 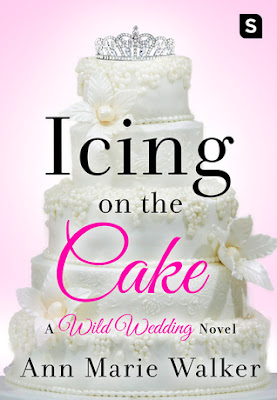 Cassandra Miller doesn’t have time for men. She’s far too busy trying to open a cupcake shop with her silent partner and best friend, not to mention catering her brother’s wedding. And let’s face it, it’s not like Prince Charming is going to stroll into the bakery and sweep her off her feet.

Henry has been a prince his entire life but for one wild wedding he wants to be nothing more than an “Average Joe”, or in this instance, “Average Hank”. However, when a case of mistaken identity and a batch of burned cupcakes ends in a night of passion, Cassie and Hank must decide if theirs is a recipe for disaster or the makings of true romance.

Icing on the Cake was not for me. I found the main characters meh and the story was dull.

Cassandra is opening up her own cupcake shop so she is super busy. She doesn't have time for a man even if one were to walk into her shop and sweep her off her feet. Not like that will happen. Plus her brother is getting married...she has a lot on her plate.

Henry is a prince, but for the weekend of his friend's wedding he wants to be just one of the guys. He tries to ditch his security people and wants to just be a normal person for a few days. When he runs into Cassie he wants to get to know her and so he figures out a way to make that happen.

Now these two were...well I felt more like insta-lust. I didn't actually see them falling in love, just that they wanted in each other's pants. And that was a weird thing - Cassie would say something then get all embarrassed that she just said a double entendre, but most of the time I was like what? Even thinking dirty I have no idea what she was talking about or how it was an innuendo. I even wrote some to my friend to see if she knew what the author was going for and most of the time she was as perplexed as I was. It was odd. And didn't help the connection between these two because it kept pulling me out of the story.

So overall this was not my favorite read. The characters were meh, and the story itself is one I have read before. I was hoping it would be fun and fresh, but instead, it felt tired and dull. Oh well.