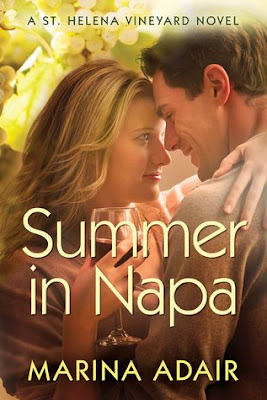 When Alexis “Lexi” Moreau caught her husband, Jeff, sampling the sous-chef’s more intimate wares in their New York restaurant, she ran—all the way back to her hometown of St. Helena, California. Six months later, Lexi has no husband and no restaurant. But she does have a three-step plan: First, convert her grandmother’s bakery into her dream bistro. Second, ignore Grandma’s matchmaking attempts. And third, avoid Marco DeLuca, her ex’s commitment-phobic, distractingly sexy best friend.

In school Lexi was off-limits for Marco. After all, she was his buddy’s girl. But she’s still as smart and as gorgeous—and apparently as immune to his charms—as she used to be. Yet the simple fake romance they agree upon to dodge Lexi’s grandmother’s matchmaking plans soon turns deliciously complicated. And the sultry summer might bring together all the right ingredients for Marco to win the only woman he’s ever wanted.

I'm really enjoying reading through Marina Adair's books! They are all so hot and sweet and fun and wonderful. I'm so glad I found her!

Lexi grew up in St Helena, but then moved away to follow her then boyfriend to school and start her life with him. She got married, they opened a restaurant, everything was great until it wasn't. Until she found him cheating on her. Until she got divorced and he got the restaurant. So now she is back in St Helena a bit embarrassed and trying to get back on her feet. She did always want to work with her grandmother and turn her bakery into a bistro and now she can. If only she can make it work.

Marco is best friends with Jeff, Lexi's now ex-husband. He has always like Lexi, was in love with her in high school, but she was his best friends girl so off limits. She still is, only now she is single, in town, and he can't seem to stay away. Lexi's grandmother keeps setting her up with dates - someone different for breakfast lunch and dinner it seems. It is a bit overwhelming and she can't seem to turn them down. As Marco and Lexi grow closer they come up with a great idea to pretend to date so she can easily get out of her grandmother's setups. Only...things don't seem to stay pretend for very long.

These two were great. Marco is a good friend, was always a good friend, and now? Now he is starting to realize maybe he doesn't really know his friend Jeff as well as he did. Maybe he can really have something with Lexi, the girl he has always wanted. Oh, it was fun. And hot! Phew! The chemistry was there right from the start. It was so much fun to read.