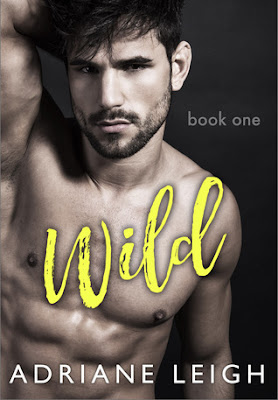 Kat Kennedy moved to the rugged coast of Maine to start a new life, but encountered much more than she bargained for in dark, dangerous, and seductive Lane Wild.

Desire and temptation smolder before she succumbs to her darkest fantasies with the captivating stranger. She doesn't expect to see him again after an explosive one-night stand leaves her breathless and craving more, but just like lightning in the darkness, he shows up in her life at the most unpredictable moments.

A sensual game of cat and mouse ensues before the attraction between them reaches a fever pitch—the magnetism combustible, the sexual tension nearly unbearable—and Kat finally abandons inhibition and explores the cunning, selfish, and sexual side of a world she's never known.

They have the perfect non-relationship—passion-fueled nights with no strings attached—until life gets real and the past and present collide in a dangerous storm of lust and obsession.

I went into Wild thinking I would love it. Hot alpha male? Yes please! Only...it felt like this book was just sexy times, and not sexy times I loved, and not much else. Sure there is the makings of a story in there, but it wasn't focused on. So what I was left with was underdeveloped characters who I couldn't connect with at all, immediate change in thinking and such that was just told to me not shown, and sexy time. Oh and a two second "dangerous past" situation that was just resolved almost instantly. Not for me.

Kat is running from her past and hiding out on the coast of Maine. She doesn't want connections to anyone or anything in case she has to run again. Only she runs into a super hot guy in town and she can't seem to stay away from him. Or rather he won't stay away from her. She lashes out at him whenever he is near and yet he still likes her. He likes her fiery side and he knows they have super hot sex so why not continue? Neither wants anything more so it will be perfect.

Then somewhere along the way they fall in love or something. Honestly I didn't see the connection between them. I was told it was there and that feelings developed but...I never saw it. Then again I never really knew the characters, just what I was told of them. Also the POV switches from Kat to Lane every few chapters and I must say I didn't care for Lane's POV at all. I found him...He is the one that was really against getting involved with someone and I didn't believed he fell for Kat at all. I know he told me he did, but I didn't see it.

This whole story felt very underdeveloped. Like it was just pieced together and only kind of fleshed out from an outline. Like okay now this happens so I am told it did. Now he feels this so I am told he feels this now. Now she does this so I am told she does it. It was...it was choppy. It felt like the story just jumped from one thing to another and was just filler to get from one sexy time to the next. Now granted I don't mind just having a book full of sexy time light on the story, but then I want the sexy time to be amazing. And this was alright, but things kept being brought up in said sexy time (like adding a partner) that were then never addressed again. I kept expecting Kat to really go and let loose and give into her darkest fantasies like the synopsis says...but she really doesn't. She comments on one thing Lane does and how it would be okay if certain conditions were met and I thought oh, that will be fun to read, but then it never happened.

Overall this book left me disappointed. I couldn't connect with the characters or story since it was just fluff and the sexy time wasn't good enough to make up for it. Just an okay read, but nothing amazing.