The Deftly Paradox by M.D. White 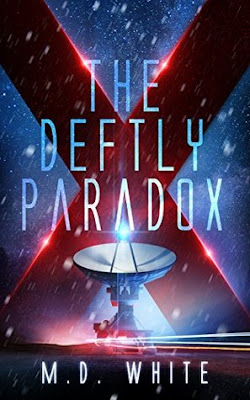 Humanity has been ruled by a machine for five hundred years.

Today it ordered their annihilation.

At the close of a devastating war, humanity’s interplanetary senate acquiesced themselves to be governed by their first and greatest product of artificial intelligence. Unbound from feelings and incorruptible by power, their new thinking machine, the OSIRIS ruled the galaxy through centuries of peace and untold prosperity.

Five hundred years later, the OSIRIS has done the unthinkable: order the annihilation of one of the most populous planets in the empire. With the fleet on approach and ready to do the bidding of their callous master, the task falls to the OSIRIS’s technicians to find the source of the command, warn the wayward planet of their impending doom, and stop the fleet before they unquestioningly quench the lives of millions.

But is every step towards the truth just another move in the OSIRIS’s greater scheme.

The Deftly Paradox was an interesting read. I really like the idea behind it - everything is rules by a machine that makes all decisions. People do whatever the machine says and don't really think about it anymore. I mean it has been so long that that is just the way things are now. But what happens when the machine calls for the annihilation of a very populated planet? Do you step up and try and stop it, try and figure out what went wrong, or do you do what it says because it knows what it is doing?

The story itself was fun to read. There is a lot of detail and thought put into planning this out that make it more detailed than I was expecting. I enjoyed seeing how this task to wipe out a planet was found, the people involved in trying to stop it and those tasked to carry out the order and everyone else involved. It was interesting to watch and see how people reacted. People don't like change. Most people anyways. It is easier to stay the course and assume it knows what it is doing than shut down OSIRIS and have to start making decision yourself. I get it, but it is good there are always those people willing to step up and do what needs to be done at whatever cost.

Now this story had lots of different characters with multiple storylines so you get to see everything that happens from different perspectives. For the most part I enjoyed reading this one. I enjoy thinking about the idea of humans not making decision anymore and what that would result in. What you would have to do to still have some checks and balances to make sure something like what happens doesn't happen, but how people would get complacent after a while and how it could really streamline a lot of things. My one issue however was the end section. I didn't really see some of the characters changing as much as they did as suddenly as they did. That is not really realistic and brought the book down a bit for me. Still was alright, but would have been better had the characters not suddenly done a 180. Oh well, a fun read nonetheless.