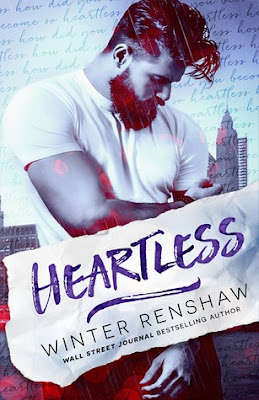 My obsession was born of innocence and good intentions, and it began the day I spotted a handwritten journal lying in the bushes outside a townhouse on Lexington Avenue. It was raining sideways that morning, and my intention was to return it the next day; safe and dry.

Only I kept it.

A week later, overwhelmed with curiosity and feeling guilty for harboring secrets that didn’t belong to me, I tried to return it.

Only I wasn’t expecting to meet him.

Unapologetically heartless and enigmatically sexy, he claims he knows nothing about the journal I found outside his place, but the reticent glint in his blue-green gaze tells me otherwise.

There’s something different about him; something damaged yet magical, and I’m drawn to him; pulled into his orbit.

The more I get to know him, the more I’m positive the journal belonged to him . . .

. . . and the more I find myself hoping, selfishly, that I’m wrong.

Heartless was a fun read. Aidy and Ace were perfect for each other. Aidy is all positive sunshine and rainbows and Ace was more reserved, more serious and could use Aidy in his life. It was a sweet read.

Aidy lives with her sister and nephew and runs her own business, which is starting to pick up. She found a diary a little while ago in the rain and fully intended to give it back to the owner, but she ends up reading it and can't quite part with it yet. The guy who wrote it loved this girl so much, in a way that Aidy wishes someone would love her. She is kind of obsessed with the diary and its owner, but she knows she eventually needs to give it back. When she goes to return it though she meets Ace and let's just say it didn't go too well. He was not in a good mood, he claimed to have never seen the diary before and just chases her off. She thinks that is the last she will see of him, but fate has other ideas. What do you do when you keep running into the same person again and again?

Ace hasn't had the best of years. He is still a bit messed up from some things that had happened and is trying to figure out what he is going to do with his life. He doesn't really think he is fit to be around people, and the day he first meets Aidy proves that. He makes a lot of mistakes, but he is not a bad person. When he keeps running into Aidy he is intrigued. She is fun and light and carefree - everything he is not. When they start to get to know each other it was fun. I loved Aidy and Ace was just as wonderful. These two were awesome.

Now there was one part towards the end I didn't care for. Aidy was a bit...stupid? She acted like she was a lot younger than she ever seemed and it was just okay. But then the author turned it around and all was right in the world again. This was a new to me author, but I will definitely be reading more.