#ThreeLittleLies Series by Sara Ney - Reviews for all three novellas

By Jen in Bookland - September 20, 2017
I love the #ThreeLittleLies series! Each story is a quick read and so much fun! These were the first introduction to this author and definitely not my last! I had read the first and third book before but somehow missed the second one. I have no idea how I managed to do that. If you haven't read Sara Ney before why not start with some cute, fun novellas? I love them all! 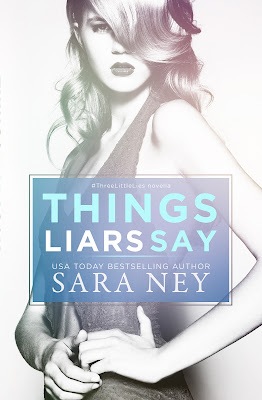 Lies, lies, lies; everybody tells them....

Greyson Keller didn't intend to lie; it just came out that way. So when the object of that lie shows up on her doorstep, she is confused, shocked, and embarrassed.

Calvin Thompson is an Ivy Leaguer, attending University over an hour away, playing rugby and basically not giving a crap. So imagine his surprise when some guy named Greyson begins rumors online that they're dating -- the only logical solution is to drive an hour and confront him...

Be there when Greyson and Cal finally meet  because.
Sparks. Will. Fly.

This novel, along with all others in this series, is  with no cliffhanger. You're welcome.
Yes, sparks fly. That's why this book is intended for those 17+ and older.
Foul language, cursing, and sexual content.

I must say I was hesitant to start reading this book. I didn't think it would be for me. The synopsis just seems so...not like something I would enjoy.

Color me surprised when I loved this story! It was sooo cute!! I really loved it right from the get go. It is a quick read, but even if it wasn't I couldn't put it down. My husband was bugging me about something and this was one where I just waved him off with a "reading" and nothing more. I couldn't be bothered to put it down as it was so much fun!! Greg and Calvin were so cute together!

So what is this all about? Well Grey's sorority sisters keep hassling her to name who she is bringing to their big soirée they are having (that Grey is planning) so she makes up a lie. She comes up with a name - Cal Thompson - based on things she sees around her. She starts tweeting to a fake Cal Thompson and thinks no harm done. Only there is a real Cal Thompson, roommate to one of her sorority sisters cousins, and said cousin brings up the fact that some guy, Grey, is tweeting about him. Maybe stalking him! So Cal makes the hour drive to go confront this guy...and finds Grey. A girl.

From there it was so so cute! They start emailing back and forth, texting each other and they start falling for each other. Cal is a rugby player and is always a bit beat up, but Grey doesn't mind. Nobody has ever thought he was super good looking before, but Grey does. She thinks he is super sexy and hot and wonderful. It was so cute watching them flirt with each other and figure this out. That last chapter from Calvin's sisters point of view? Amazing!! Man they were adorable. A super cute, fun, quick read. 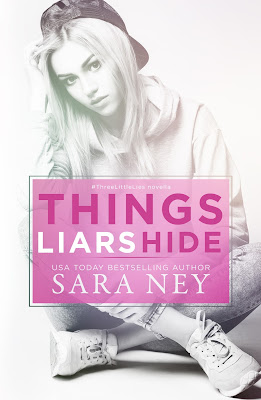 Authors Note: This novella, along with all others in this series, is  with no cliffhanger. You're welcome.

Secrets, secrets, everybody has them…

Tabitha Thompson is many things, but a liar isn’t one of them. Unless you count the sexy secret she’s spent a year hiding from everyone: her friends, her family. The secret she never counted on anyone discovering…

One chance encounter.
One clumsy mistake.
One sexy discovery.

Now, only Collin Keller stands in the way of her secret—and everyone else. And he just may be the one who ruins it all…

When I started reading Things Liars Hide I was really confused. I was just so so on reading it, but definitely willing to give it a try since I loved the other two stories in this series. But Tabitha? I thought her secret was something else and I didn't expect to really like her. But I did. Because how could you not?

Tabitha has a secret. Something she has been keeping from everyone for a long time. Her friends, her family, everyone. No one knows her secret. Until Collin. Sexy, funny Collin. Her brother's girlfriends brother. It would be weird if she liked him/dated him right? Like siblings dating siblings - parents wouldn't like that right? Oh Tabitha. I didn't really understand her totally, I don't get being so embarrassed by things and whatnot, but I so enjoyed reading her story.

Collin is taken with Tabitha as soon as he sees her. It is a bit of an awkward first meeting, Tabitha makes some assumptions about some things that she quickly learns are not as they appeared, and it was a lot of fun. Collin is interested so he won't let her standoffish ways dissuade him from trying to get her to give him a chance especially when he keeps running into her. He is wonderful. He learns her secret and is amazing with her. So supportive and there for her however she needs. These two were great together. Tabitha fought it at first, but she liked Collin from the beginning as well. There is only so much fight she can put up before she gives in to a guy as great as he is. This book was another
great read in this series! 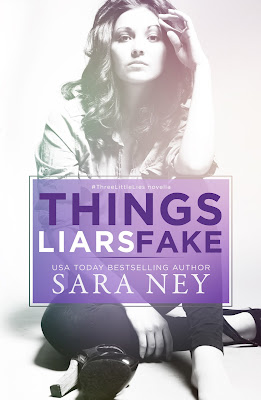 Someone you barely knew asked you for a favor.

They needed you to be something you weren’t, in exchange for nothing. Unless you count a mouth full of lies and a half-broken heart. Faker. Pretender. Liar. There are worse things to be called.

So would you do it? Would you?

And you’re about to find out what happens in the end.

Phew! Daphne and Dexter we so hot together! Ah! I loved this story! After reading Things Liars Say I immediately wanted more. I had this one on my Kindle so I had to read it and it was another great read. It was a lot of fun, super cute, hilarious story.

Daphne first sees Dexter when she is out with her girlfriends at a wine bar. He is with a bunch of jerk guys, but he doesn't seem to be happy to be with them which intrigues her. Plus he is wearing a sweater vest. To a bar. On a Saturday night. Who does that? Nothing really happens, but when they both find themselves alone at the theater the next weekend things get interesting. They are both there for the same vintage Sci-Fi film and there is that awkward they say hello, they go into the same theater, do they sit together? Do they keep talking? What should you do? thing.

They both liked each other right away, but Dexter is not very confident with women. Especially not women like Daphne whom he thinks is way out of his league. She is a hot, sexy nerd, but still a nerd and so she is perfect for him. She thinks Dexter is incredibly hot with his glasses and suspenders and oh I loved them! She wants to go on a date with him, but isn't sure if he is into her like that.

When his family thinks they are dating he asks her to play along. To go to a family gather as his fake girlfriend, and she agrees even if she is a bit disappointed to have to be his fake girlfriend. He always thinks she wouldn't go for someone like him, but they are sweet. With the help of Dexters pesky twin sisters these two eventually figure everything out, but I loved watching them get there. Lot of fun shenanigans that lead to super freakin hot sexy times! These two were perfect. This story was great. A super fun, lighthearted, funny, cute read.
*Note: I received a free copy of this book for voluntary review consideration 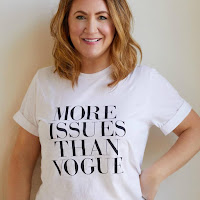 Sara Ney is the USA Today Bestselling Author of the How to Date a Douchebag series, and is best known for her sexy,  New Adult romances. Among her favorite vices, she  iced latte's, historical architecture and well-placed sarcasm. She lives colorfully, collects vintage books, art, loves flea markets, and fancies herself British.
She lives with her husband, children, and her ridiculously large dog.
Facebook * Twitter * Instagram
4.5 stars