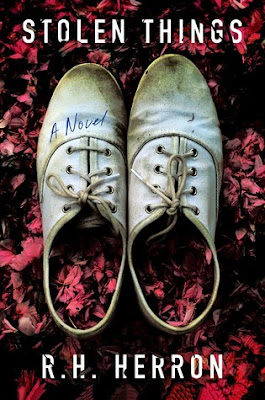 A sensational crime, a missing teen, and a mother and daughter with no one to trust but themselves come together in this shocking debut thriller by R. H. Herron.

Laurie Ahmadi has worked as a 911 police dispatcher in her quiet Northern California town for nearly two decades. She considers the department her family; her husband, Omid, is its first Arab American chief, and their teenaged daughter, Jojo, has grown up with the force. So when Laurie catches a 911 call and, to her horror, it’s Jojo, the whole department springs into action.

Jojo, drugged, disoriented, and in pain, doesn’t remember how she ended up at the home of Kevin Leeds, a pro football player famous for his on-the-field activism and his work with the CapB—“Citizens Against Police Brutality”—movement. She doesn’t know what happened to Kevin’s friend and trainer, whose beaten corpse is also discovered in the house. And she has no idea where her best friend Harper, who was with her earlier in the evening, could be.

But when Jojo begins to dive into Harper’s social media to look for clues to her whereabouts, Jojo uncovers a shocking secret that turns everything she knew about Harper—and the police department—on its head. With everything they thought they could rely on in question, Laurie and Jojo begin to realize that they can’t trust anyone to find Harper except themselves . . . and time is running out.

It took me a chapter or two to get into Stolen Things, but then once I was in I was all in. I couldn't put it down. I had other things I had to do so I would try and put it aside and do something else, but I would just be thinking about the story and wondering what was going to happen next until I gave up and started reading some more. It was great!

Now I don't want to talk too much about what happens in this story as...well I went in not knowing anything except it was a thriller about a 911 dispatcher who answers a 911 call from her daughter. I cannot imagine what it would be like to do that job and then to have your daughter call in? Man, that would be rough. And Laurie does have a rough go at it. She tries to stay strong and be there for Jojo, to keep everything together and figure out what happened, but it is hard. It would be so difficult to go through that and she tries her best. I loved how real she felt. How she acted like you might if you were in a similar situation. It would be very stressful and then not sleeping well on top of that and going crazy with worry could make you a bit like Laurie. I loved it. I loved how true it felt. How real people are not perfect and know the right thing to do in all instances even if you worked in with these kinds of situations before. When it is your own family members it is different. You might not stay calm, cool, and collected.

And Jojo? She was such a teenager. There were moments when I wanted to hug her and tell her she doesn't have to be that cool don't want or need her parents person. She doesn't have to push them away. She can ask for what she wants, get help when she needs it, just you don't have to have that stoic I don't need my parents even when I do thing going on. She went through something horrible and lashes out at times as one would expect. Really I think the characterizations of these characters is what made the story. What made it so compelling.  Yes, I wanted to know what would happen next, what was going on, who is involved, how it would all end up, but without the character feeling like real people it would have been missing that special something that kept me reading. That made me not want to put the book down. This was a great read. The perfect amount of tension that keeps you hooked with a story with a few twists and turns along the way and characters I loved reading.