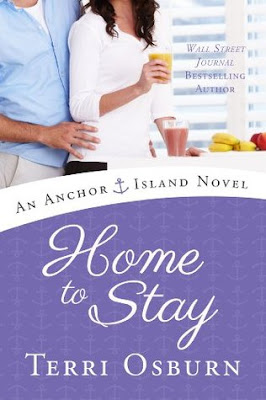 Willow Parsons’s two new best friends are getting married, putting her squarely on the sidelines of romance—which suits her just fine. After the nightmarish situation she escaped from, featuring the ultimate Mr. Wrong, she is more than happy to spend her days slinging drinks in Dempsey’s Bar & Grill, and her nights alone. But her Anchor Island refuge has just one catch: muscle-bound charmer Randy Navarro.

Everyone in town knows that Randy, owner of the local fitness club, is a giant teddy bear. Everyone, it seems, except for Willow. He’s convinced that her avoidance is more than just playing hard to get, and is determined to uncover the secrets that shadow her lovely eyes. But when old fears are dragged into the light, can Randy get Willow to stay and fight for their love…or will she take flight, leaving him and Anchor Island behind?

Home to Stay is a charming, romantic tale about following your heart to find where you belong.

I seem to be on a roll with reading books with super annoying main characters. People who are horrible to other people for no good reason. This was one of them. Will was horrible to Randy. She would get angry and lash out at him for no good reason. He was nice and he can't help that he is big just like the person who hurt her. He is who he is and even though her bff, who happens to be his sister, and everyone else keeps telling her that Randy is super sweet she won't listen to them. Because she can't get involved and so she should be horrible to him all the time and make him feel like crap for existing. Cause I love when that happens. *some slight spoilers ahead*

Now Will is on the run from someone. Something obviously happened, right from the beginning it is obvious it is probably an abusive ex, so she tries not to let people in since she might have to run if he finds her. Only she has been on Anchor Island for a year and she seems to be safe. She has some good friends and is doing okay until some reporters come to do a story in a travel magazine. Now the reporter lady that came was so crazy in a way that I was like would a reporter really do this? I get she wants to cover "real" stories, but...why would she be so evil to someone she doesn't know? Or why wouldn't she at least try and figure out why someone is hiding? I mean has she never heard of domestic violence? Has she never heard of women who try and escape horrible situations and if they are found their ex's literally kill them? I don't know how you could be so out of touch. Because what she does find out about Will doesn't make sense unless there is something else going on. So she was a bit much.

Now Will and Randy get thrown together when they have to work together on their friend's wedding. Will has to go with him to get his tux fitted because her friend can't. And so Randy tries to win Will over to at least being friends. Because he hates how she is always afraid when he is around. For a year he has done nothing but be nice and unthreatening to her, but she still keeps her walls up. Until she can't anymore. Now I really liked Randy and he was sweet, and Will had her moments where I liked her too. She was there for her friends as much as she could be, but she was also crazy ridiculous trying to hide that she and Randy were even talking let alone anything more. Because...she is crazy. She might have to leave and she doesn't want to hurt Randy or her friends so she doesn't want anyone to know anything. Okay...but of course that never works for long. I didn't really get her. I think part of the issue was you don't get the full story until way late in the book and even then I was like okay....is this guy really after you? Are you sure? Cause it doesn't seem like it.

Then the end where everything magically is just better and she doesn't have to hide anymore? Yeah I am sure it was that easy. Come on. If this guy who is after her were really after her it would take more than the almost nothing she did to make him give up on finding her. If I were him I would have found her in two seconds and that would have been that. I don't buy that the special circumstances she finds out about magically make her invincible. Magically make it so she is safe. Nope.

This was an easy read and alright, but it wasn't all together believable. Will was annoying when she would lash out at Randy and be horrible to him, the two of them together when she was being nice was cute, but the ending kind of ruined it as it wouldn't have been that simple.