Review: The Duke and I (Bridgertons #1) by Julia Quinn 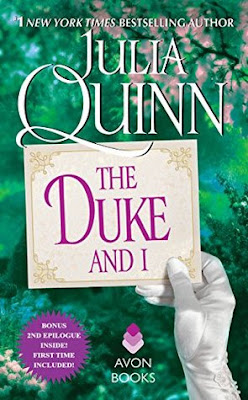 Can there be any greater challenge to London’s Ambitious Mamas than an unmarried duke?

By all accounts, Simon Basset is on the verge of proposing to his best friend’s sister, the lovely—and almost-on-the-shelf—Daphne Bridgerton. But the two of them know the truth—it’s all an elaborate plan to keep Simon free from marriage-minded society mothers. And as for Daphne, surely she will attract some worthy suitors now that it seems a duke has declared her desirable.

But as Daphne waltzes across ballroom after ballroom with Simon, it’s hard to remember that their courtship is a complete sham. Maybe it’s his devilish smile, certainly it’s the way his eyes seem to burn every time he looks at her… but somehow Daphne is falling for the dashing duke… for real! And now she must do the impossible and convince the handsome rogue that their clever little scheme deserves a slight alteration, and that nothing makes quite as much sense as falling in love…

The Duke and I was...well it wasn't the best of reads. I didn't love it, but I didn't absolutely hate it either. Well, maybe that is not true. I did have a few issues with things that happened in the story which as I think more on them I really don't approve of, but besides that there was something missing for me. I am not sure why I didn't enjoy it more, but I didn't. It should have been a winner, the characters, for the most part, should have been fun and their back and forth should have been enjoyable to read but it just fell flat for me. I'm not sure why exactly, but it didn't completely work. There will be spoilers ahead!!

Simon and Daphne are drawn to each other right from the start, but right away they have this thing where they can't be together. Simon because she is his best friends sister and you don't do that, and Daphne as he would never want her. No one really does. But she is a special snowflake and oh so different from the other women and that is why Simon is intrigued! She is not one of those silly girls who doesn't have a brain in her head and just wants to get married to anyone *cue major eye roll here*. No, she speaks her mind and tells you what she thinks and doesn't care about the repercussions. But these two were okay at first. They decide to pretend to be dating so they won't have other eligible people foisted on them, but, of course, they fall in love along the way.

Daphne wants to be married with kids and all of that, but Simon is adamant he will never get married and never have kids. He tries to keep his hands to himself, but when Daphne throws herself at him his good intentions go out the window. And her way annoyingly overprotective brother sees them and demands he marry her, only Simon would rather die than get married even though he cares about Daphne. Because he has daddy issues. Ugh. So Simon and her brother are going to duel, but she ends up stopping it and getting him to agree to marry her. Only he tells her he can't have kids to make sure she is going in to marriage knowing there will be no children because of before mentioned daddy issues.

So things are moving along and they are happy, he pulls out every time they have sexy time, but Daphne is so naive and innocent she doesn't know how babies are made so when she stumbles upon the information she is so angry with Simon! He lied to her! He could have kids, he just doesn't want them! So then she oh so cleverly has sex with him when he is drunk and still half-asleep so he ejaculates in her and she could get pregnant! Yey for raping your husband to get what you want! Hooray! Aren't we all happy that it is totes okay to have sex with someone while they are basically passed out and you KNOW they do not want to have kids, but try and trick them into it by having sex with them when they are not fully in control to be able to stop the potential for kids? I mean Simon was rightfully pissed when he fully comes to and I would be to. That was so not cool. So beyond not cool I wouldn't be able to trust her again. I was ready for this to not work out between the two of them, but then Simon freakin apologizes to her for flipping out?!? Really? Really. It was so stupid. Sure he should have been upfront about never going to have kids not he cannot have them, but what she did was WAY worse.

So yeah. That pretty much ruined the book for me, but before that I wasn't loving it either. Something about the writing was flat to me so...I may try another book from the author just to see if it is any better, but I don't have high hopes.