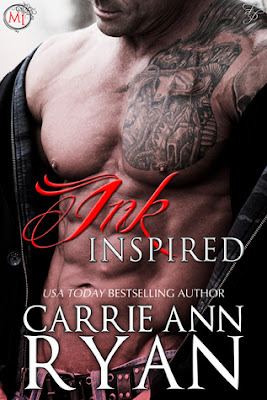 Shepard Montgomery loves the feel of a needle in his hands, the ink that he lays on another, and the thrill he gets when his art is finished, appreciated, and loved. At least that’s the way it used to be. Now he’s struggling to figure out why he’s a tattoo artist at all as he wades through the college frat boys and tourists who just want a thrill, not a permanent reminder of their trip. Once he sees the Ice Princess walk through Midnight Ink’s doors though, he knows he might just have found the inspiration he needs.

Shea Little has spent her life listening to her family’s desires. She went to the best schools, participated in the most proper of social events, and almost married the man her family wanted for her. When she ran from that and found a job she actually likes, she thought she’d rebelled enough. Now though, she wants one more thing—only Shepard stands in the way. She’ll not only have to let him learn more about her in order to get inked, but find out what it means to be truly free.

This is the prequel to the Montgomery Ink series. It is also found in the Midnight Ink - Boxed Set.

Ink Inspired was...meh. I started it and it should have been everything I love - hot tattoo artist and buttoned up accountant fall in love. Sign me up. Only the execution wasn't very good. I didn't feel like the character were real and this was more an insta-sexy times than insta-love. There is a difference.

Shea is tired of living up to what her mom wants. Her mom who is a supervillain horrible to her. Her mom who is constantly belittling her and telling her she is a whore who needs to just spread her legs so she can marry this rich guy. Why? I don't know as Shea is rich herself so...I guess you can never have too much money? So the mom was horrible in an unrealistic way.

So Shea decides to do something for herself and that something is get a tattoo! It will be perfect and her mom will hate it. Only she goes into Midnight Ink and Shep doesn't give people tattoos unless he thinks they really want them. And he can tell Shea is hesitant and doesn't really know what she wants, which is a fair observation, but come on. Anyways he won't tattoo her until he gets to know her better and cue lots of sexy times. It was a bit much.

Then there is some drama with the mom and I don't know. This story wasn't written in a way that you really knew the characters. Or you knew what they were supposed to be like but they didn't read as real people. It was a quick read so that was good, but not the best.