One More Moment (Band on the Run #3) by Samantha Chase 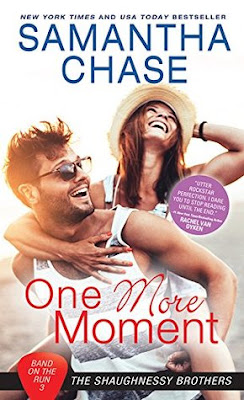 Charlotte Clark is devoted to her work
...to save the world
...to help the homeless
...to get a broken man back on his feet

When Charlotte Clark offers to pay for Julian Grayson's coffee, the world-famous drummer assumes she wants something from him. But Charlotte has no idea who he is, and Julian can't resist keeping up the charade—being incognito is a novelty and a relief. He'll have to tell her...eventually. But as Charlotte cheerfully undertakes to transform his life, Julian realizes there's something about her that gives him what he hasn't felt in years: hope.

Oh, Julian and Charlotte. I absolutely loved their story. They are perfect together and it was so much fun getting to know them.

Julian just got out of a toxic relationship. A relationship that he had been in for way too long. That he should have broken off years ago, but didn't. That he made sure to blow up in one epic way so that there was no going back to it. But now he is a bit lost. He doesn't want to be weak and the guy everyone is talking about. He doesn't know how to trust anyone, except his friends and bandmates. He went away and tried to clear his head, but it didn't work as well as he had hoped. He is still bruised and battered when he comes back, but luckily his manager offers him the use of his beach house for a few months while he tries to find a new place to live without so many memories. While he tries to figure out his next steps because he isn't sure he can go back to being in the band. Not when everyone knew what was happening with his ex for so long. How can he trust them again? How can he face them when they all will be thinking about what a loser he is? He can't do it.

Charlotte is one of the most genuinely kind people you will ever meet. She will do whatever she can to help anyone in need. When she first meets Julian she thinks he is like one of her clients. Someone that maybe is homeless, or just released from rehab, or something like that. Someone who could use some help finding a job and making their life a little less...hopeless. She is amazing at her job and how she works herself to the bone for others is probably a bit much at times, but she can't help it. When she meets Julian she doesn't know who he is. She doesn't know what is going on with him, but if she can she wants to help. Even if it is just buying him a cup of coffee when he doesn't have the money. And oh, their first meeting was kind of hilarious to watch. Because Julian was definitely a jerk, but you also understood why he was. He is used to people using him and wanting him for his fame and fortune, so he doesn't know what to do with Charlotte. With someone who seems to not want anything. With someone who just did something nice and is happy to leave it at that. With someone so incredibly kind and wonderful.

These two definitely didn't hit it off right away, but there was still something there between them. And they definitely have some bumps in the road, how could they not when Julian keeps part of himself closed off from Charlotte and doesn't seem to understand when he makes the same mistakes he did with his ex. Or that he hasn't really moved on from that and it is still affecting him and his relationship with here. These two were wonderful to read. I loved Charlotte so so much. She is one of my favorite people. And Julian is super sweet as well even if he messes up a lot. Even if he needs to work on getting out of his ways that he was used to. Even if he has a lot to work through and figure out. These two were so sweet to read and I loved them so much.