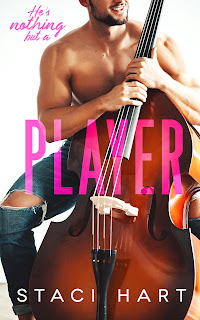 Coming Oct 11!!
Add to your to-read list on Goodreads

He plays the bass with expert fingers. He plays women with intoxicating charm. And he’ll play me with the ease of a virtuoso.
Who better to teach me to play than the master himself?

There’s so much I don’t know.
Like the fact that I’m only a bet.

But we are what we are. He’s a player, through and through.
And I’m the fool who fell in love with him.