Thief (Boston Underworld #5) by A. Zavarelli 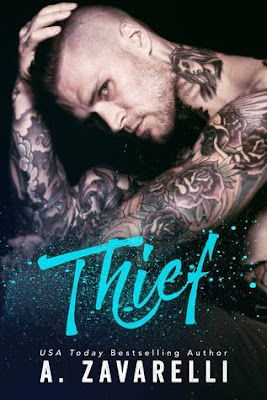 I live by a code that can’t be bent or broken. It is my duty to my family to stay innocent and pure. To marry an Italian man. The stars are already aligned.

But Nikolai Kozlov re-writes my destiny with five simple words.

You belong to me now.

He's Russian mafiya. A thief. A skilled liar with no moral boundaries. He is everything I have been taught to hate. A man who stands for nothing. A man who takes what he wants without a second thought.

And what he wanted was me.

He thinks he controls my fate, but what he doesn’t know is, sometimes it’s the good girls you have to watch out for.

I live by a code. The Vory code. It is my duty to my family to protect the brotherhood. To destroy anyone who threatens what we stand for, including her.

She’s a dancer. A beautiful little doll. My prisoner, and my new favorite puppet. This mafia princess thinks she has me under her spell, but in the end, she is simply collateral.

But this is what bad men do.

Oh man since reading Ghost I have been waiting to read Alexei's brothers story, and now it's here! I was so so excited to read this one and it did not disappoint!

Nikolai is Alexei's brother. Though most people don't know that. He is the one whom their father paid attention to, but that might not be a good thing. Because their father is not a good person. But Nikolai is a good soldier and does what he needs to do for the brotherhood.

Tanaka is a dancer. A ballerina. It is what she lives for. It is the only things she has really and she will not give up, even when she gets injured and it looks like she will no longer be able to dance. She is determined to make it work and do it because she can't imagine her life without dancing.

When Nikolai takes Tanaka to put some pressure on her father neither of them expected to fall for the other. I loved how these two are together. Nikolai tries to not feel for Tanaka because even if he does that doesn't change anything. He can't be with her because he has responsibilities to other people. It could never work. They are destined to not be together. But that doesn't mean that he will let Tanaka not take care of herself. I loved how he was willing to do whatever he needs to keep her safe and healthy.

And Tanaka is stubborn and strong and wonderful. Sure she has some issues, but I loved how determined she was. When she set her mind to something she will do anything to achieve it. Which is not necessarily always a good thing, but they way she grew up you can't really fault her for having issues. Still, they don't break her. She was amazing.

The two of them together, Nikolai and Tanaka, were wonderful. I know they are not fated to be together, but you never know what will happen. It was a great read and sad that it is the last book in the series. At least I can go back and re-read my mafia boys.