One More Promise (Band on the Run #2) by Samantha Chase 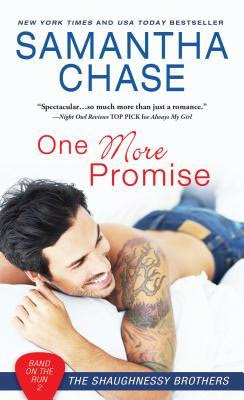 Ambitious Paige Walters is ecstatic when she's hired to recruit musicians for a literacy campaign—it's her chance to prove she's got the chops to make it in the family business. She certainly isn't going to let some fallen idol screw it up. But as the work brings Paige and Dylan closer together, their attraction grows...and so do their challenges...

One More Promise was such a great read. I loved Dylan and Paige. I loved how similar yet different they were. How they saw each other, really saw what made each other tick. How great they were and how amazing they could be together. This is another favorite from this author!

Paige is very ambitious, confident woman. She works hard to make sure that she is always on top of things at work because she wants to prove that she is a good asset. That she didn't just get this job because her family owns the company. That she deserves it regardless. She is very confident and does whatever needs to be done, except when it comes to her family. Then she resorts to this unsure girl who doesn't say what she should and lets them walk all over her. Her sister is especially terrible. I don't know how she put up with all the garbage her sister spews her way. Oh, I hated the sister.

Dylan just got out of rehab and is in need of some community service hours. When he gets an invite to be part of Paige's literacy campaign he is excited. He struggled as a kid, never really learned to read until he was much older and someone taught him. He knows what it is like and how our schools fail some kids. How so many may graduate without this crucial skill so he wants to do what he needs to do to be a part of this. Yes, he needs the hours, but he also thinks it is a great idea.

When Paige and Dylan first meet it is a bit rocky. Paige already wasn't happy as Dylan wasn't who she wanted for her campaign, she just wanted authors, but now she is stuck trying to make this work. And when she finds out about his past she is super judgemental. She realizes it and does apologize when called out on it, but she could be really judgy at times which was surprising. She does this occasionally with Dylan as...well maybe partly it was to try and fend off a potential broken heart when she starts to feel more than friendly feelings towards him. She knows he would never want to be with someone like her and for as confident as she is in her job, she can be pretty insecure in other areas of her life.

Dylan likes Paige right from the start. She is smart and fun and beautiful and everything, but he can't be with her. That is something the old Dylan would do and he is trying to be a new guy. A changed man. Not that jerk he used to be.

I loved watching these two try and figure everything out. How Dylan tried to get Paige to stand up for herself and not just do everything her sister should be doing because she knows her sister won't do it. To let her sister fall on her face and not just take credit for everything Paige does. To be that amazing woman he knows she is and let her family see that. And Paige helps Dylan see that even if he is not that guy he used to be he can still go out and have fun. He doesn't have to keep punishing himself for things he did in the past. She encourages him to play his music and get together with his band and everything he might want to do. I loved both of them individually and together they were amazing. They were just what the other needed. Plus I absolutely loved how things worked out in the end. How Paige and Dylan both dealt with things and how they were together. I was pleasantly surprised there wasn't more drama with everything that went on. This was a great read from this great author.